Edifier was always known as one of the audio world’s key players. And along with manufacturing class-leading and exemplary audio products, the world-leading audio brand is continuing to populate its shelf of awards. 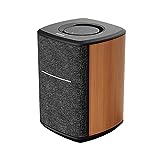 Simply connect your speaker to your home Wi-Fi network and start streaming HD audio from your favorite music app. The speaker does not have a built-in mic. Your privacy is important.

It just got six awards in the VGP (Visual Grand Prix) 2023 in Japan. Among the innovative products of Edifier, the ones that were recognized as Gold Award Winners were the W240TN, WH500, and MS50A.

Have no idea about what VGP Awards mean and why they matter? Well, it is the “Oscar in the Audio industry.” VGP is the most authoritative and largest audio-visual award in Asia.

The award-giving ceremony takes place on an annual basis. And it is hosted by Ongen Publishing Co. Ltd., which is one of Japan’s prominent publishing companies.

Ongen Publishing Co. Ltd. is also known for having a high level of expertise in audio-visual-related devices and state-of-the-art technologies. And getting six prestigious awards from this publishing company is a huge deal for Edifier.

Nonetheless, the awards were launched in 1987, and VGP awards work by bringing together all the respective reviews from multiple countries.

These offer an authoritative reference guide for regular customers looking to get the most value for their money.

However, this is not the first for Edifier to get multiple VGP awards. Back in 2022, the brand received 3 VGP awards. However, compared to the VGP 2022 awards, VGP 2023 awards are a massive leap for the audio specialist.

According to the Edifier, “We are truly honored to be receiving awards such as these, from such an important panel of judges who have a wealth of experience in this industry. We strive to be a leader in the audio-visual industry, and with our slogan of A passion for sound.”

The CTO of Edifier, Stanley Wen, stated, “We are very happy and extremely proud to have our company recognized by winning these highly respected, much sought-after VGP awards.”

Want to know what is so special about the Gold Award winners? Take the MS50A Classic WiFi speaker, for example. By launching this speaker, the brand took a crucial step into the smart speaker market.

It offered the customers high-definition audio in a speaker that had a premium build quality.

The speaker boasts bleeding-edge DSP and AMP technologies and an AP6265 chip. Most importantly, it does not fail to provide world-class audio performance. And you could say the same for the other products that got their respective VGP awards.