Grado is introducing their new headphone series, which is the Statement X. And with the introduction of the new series, they are also bringing two new headphones with new drivers. 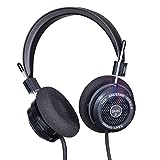 Grado headphones can reveal new notes and details in songs heard hundreds of times. The driver and housing working in tandem react to sound vibrations and virtually eliminate transient distortions.

According to Grado, these drivers are the fourth generation X drivers. And you will find them on both the new GS3000x and GS1000x.

However, the most powerful driver is inside the flagship model, which is the Grado Statement X GS3000x. And along with the powerful driver, the headphone comes with an exterior wood body.

That said, the driver is not inside the wood body. Instead, there is a metal chamber, which Grado has surrounded with a single body of cocobolo wood.

The GS3000x also features a new headband and the new and improved 12-conductor braided cable from Grado.

According to the manufacturer, this flagship headphone is hand-assembled in Brooklyn, NY. So, you can understand how much of an emphasis they have put on the overall build quality.

But, what does the powerful driver have to bring to the table? According to Grado, the GS3000x is the best-sounding headphone the brand has released in its seven-decade history. Also, it features the largest driver that has been inside the offerings from the brand.

On that note, the manufacturer has specifically tuned the 52 mm driver to “embrace the tenacity of cocobolo and precision of metal.”

It features a reasonably powerful magnetic circuit combined with a voice coil that has decreased effective mass. The diaphragm also has been reconfigured by the team.

The sonic properties, along with the innate mass of the cocobolo, make it perfectly pair with the new headphones. To add more mass to the system, the team paired the headphones up with a metal inner chamber.

But this chamber is not only there to increase the mass. It also plays a crucial role in terms of the rigidity of the new driver.

Alongside that, each GS3000x headphone will be different as the cocobolo has striking color, and patterns will vary from pair to pair.

The GS1000x also deserves a fair amount of attention. It combines ipê and mahogany wood. And it has the same new headband and 12-conductor braided cable.

The GS1000x has one of the most crucial designs in the two-decade history of Grado. It is one of the first hybrid pairs from the company that combines ipê and mahogany wood.

According to the brand, “Mahogany still exudes warmth and texture, while ipê improves the structural integrity of the sound passing through the grains of the housing.”