Marshall is well-known for offering studio-grade speakers. They have an extensive lineup of speakers for producers, musicians, and audio enthusiasts. 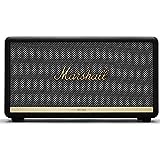 Even though the lineup had wireless speakers before, the offerings that Marshall provided lacked the oomph that many look for. Marshall decided to change that by bringing out three improved Bluetooth speakers!

Basically, the three new speakers are based on the previous lineup of Bluetooth speakers. The new ones go by Stanmore III, Action III, and Woburn III.

And yes, they do look pretty similar to the previous predecessors. Well, even though the speakers’ outlook is pretty much the same, the story from the inside is totally different.

Among all the upgrades, the show star is the new tweeters. They are now angled downwards and have updated waveguides.

With these two, the new tweeters can offer a significantly expansive sound. Marshall also integrated a new Placement Compensation feature. And if the feature works as Marshall intended, these speakers can be serious challengers to the current top-rated Bluetooth speakers.

So, how does the Placement Compensation feature work? Well, it aims to work pretty similar to the TruePlay sound correction technology that Sonos has on their Sonos Roam and Sonos Move. The speakers will detect nearby surfaces that can affect the sound and automatically adjust the EQ.

But that is not all! The range will also come with Bluetooth 5.2 connectivity, clearing most of the hassles regarding connectivity.

And if you want to, you can run them with the 3.5 mm input. There is a Dynamic Loudness feature as well. that will adjust the total tonal balance by considering the level of volume. Eventually, it will offer a rounded-out sound to your ears.

Regarding the outlooks, the new speakers still borrow the look of the brand’s iconic stack speakers. This look has formed the backline of the ever-so-popular guitar singers, including Jimi Hendrix and Slash.

And although the models have the same script logo and brass control knobs, Marshall claims they are of PVC-free material. The brand also claimed that the speakers are from 70 percent recycled plastic and are of fully vegan materials.

That said, if you have been looking for a new Marshall speaker to pair with your TV, you might want to get the Woburn III. It has an HDMI connector, which will let you connect it with the TV without facing issues.

Furthermore, all three speakers come in black, brown, and white color options. And it will be possible to get your hands on one of them from June 23rd.