There have been a lot of rumors regarding the second iteration of Sennheiser Ambeo. And the brand has even teased the new additions for a long time now. 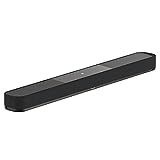 Although most speculated that the teasers were for Ambeo 2, Sennheiser has confirmed that the new model will go by Ambeo Soundbar Plus. Also, it has unveiled the Ambeo Sub.

Among the two releases, the primary highlight is the Ambeo Soundbar Plus. It might be the missing piece of your home entertainment system.

At its core, the Ambeo Soundbar Plus is a standalone soundbar that will get rid of the fuss related to extra cables and rear speakers. It is the world’s first 7.1.4 standalone sound, and it promises a lot.

Firstly, Sennheiser claims it to be a smaller and more affordable version of the original Ambeo Soundbar, which is known as the Ambeo Soundbar Max now.

Next, the soundbar promises to be more capable of offering spacious sound in a home movie theatre environment. It comes with a side-firing driver on two ends, three forward-facing drivers, and two up-firing drivers.

Along with those, Sennheiser has integrated two up-firing woofers in the soundbar. Then, there is the fact that Sennheiser managed to fit all those drivers and woofers in an exceptionally small package.

Now, this compact form factor might raise some questions in your mind. However, just know that the Ambeo Soundbar Plus utilizes the same 3D sound processing that is present in the Original Ambeo.

Furthermore, you have the Self-Calibration tech, which determines the room’s acoustic properties and positions the seven virtual speakers around you. This feature also places four more over the head. So, you will have a fully-immersive movie-watching experience.

But that is not the only tech that is present in the Ambeo Soundbar Plus. In addition to that, you have Dolby Atmos, Sony 360 Reality Audio, DTS:X, and MPEG-H Audio support.

There is also a feature that will enable you to upmix stereo content and convert it into a virtual surround sound.

Finally, controlling the Ambeo Soundbar Plus will not be an issue either. Sennheiser has integrated Apple Siri and Alexa.

The soundbar utilizes the same Ambeo OS platform found in the Soundbar Max. So, there is support for AirPlay 2, Tidal Connect, and Spotify Connect.

Though, one will be more than enough as this subwoofer features a 350-watt Class-D amplifier and offers thundering bass that is down to 27 Hz.