The home cinema market is growing continuously. And that is one of the reasons why more and more brands are getting into it. Musical Fidelity is one of them. 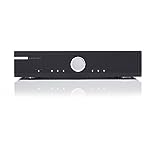 However, its entry into this specific market is not as bland as some of the others. The brand came fully prepared!

Musical Fidelity has just unveiled a new multi-channel home cinema amplifier, the M6x 250.7. It is one of the three models from the brand, and it sits pretty comfortably in the middle of the lineup.

As you might have guessed by going through the name, the amplifier offers a seven-channel setup. The channels are of A/B amplification.

Musical Fidelity claims that the average power of each channel is 250 watts at 4 Ohms. And the peak power is stated to be 400 watts. Now that is some serious power specification for a home cinema amplifier.

Under the hood, you will find a modular amplifier layout. A power transformer powers this entire layout. But it is not any other transformer that you might have seen in amplifiers. Musical Fidelity calls it “super-silent.”

But is it really silent? Well, the brand has integrated a proper heatsink design. Combined with a fanless chassis, you will be looking at a setup that can run without any unwanted noise.

And what about the modular approach? According to the brand, the modular nature results in a detailed soundstage and high dynamic range. The signal-to-noise ratio is 105 dB at 1kHz/200 watts.

And with 100 watts power output, the THD + N is at 0.0003 percent. Nonetheless, the new M6x 250.7 has the ability to connect to an AV receiver or multi-channel pre-amplifier.

Also ReadAndroid 13 for TV is Ready for Prime Time, but Your TV Might Not Get It Anytime Soon

It has plenty of physical connections, which include the unbalanced RCA inputs and balanced XLR for each channel. You will also find line-level RCA outputs on each channel.

Those outputs are for bi-amplifying. Basically, you will not find yourself wanting more I/O ports. The device also comes with isolated speaker output terminals.

These terminals have gold plating on them. And for the trigger in-out, you can power the amplifier on and off externally if you want to.

Now, the M6x 250.7 is not the only device that Musical Fidelity plans to launch for the home cinema market. As stated, that amplifier is one of the three models in the range.

The brand plans to launch the 11-channel and 5-channel versions in the future. And when it comes to the M6x 250.7, the amplifier is now available in the UK.

This post was last updated on 2022-12-07 / Some images from Amazon Product API & some links may be affiliate links which may earn us a commission from purchases.