In an official press release on June 15th, Sennheiser talked about their new noise-canceling headphones. According to that press release, the brand had plans to unveil the headphones later this month. 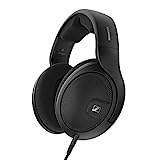 Natural and accurate reference sound that reveals the truth in your music. Lifelike depth and realism from open-back earcups that allow sound waves to expand naturally

However, a Canadian retailer just started a hype train by leaking the first-ever full images of what can soon be a true competitor of the Sony WH-1000XM5.

From the leaked images of Sennheiser Momentum 4, it is pretty apparent that the fourth generation of the Momentum series will boast sleek-look ear cups.

The photos also show that the pair of headphones will flaunt a fabric-wrapped headband, which looks pretty comfortable at first glance.

Now, if you compare these early looks of the Momentum 4 with the third iteration of the Sennheiser Momentum series, you will notice that the design has quite a contrast.

The Momentum 3 had more of a traditional design for the cans. But it is not like the Momentum 3 had nothing going for it. The headband was steampunk-inspired, which made the headphones look pretty unique.

Nonetheless, the leak does not give much information when it comes to what is under the hood. However, it does state that the Sennheiser Momentum 4 has a “Smart Pause” feature.

This feature will automatically halt the playback when you get the headphones off your head. It also boasts an “Auto On/Off” feature that will help the Momentum 4 to save battery life.

Additionally, the leak gave a sneak peek into what the Momentum 4 will come with. The package will supposedly include a nifty travel case.

And from the leaked images, it seems like the headphones will come with a USB-A to USB-C charging cable, a 3.5 mm cable for listening to music in wired mode, and a handy plane adapter that frequent flyers can surely make use of.

Although the leak did not give any information regarding the specs, from what Sennheiser talked about, the new Momentum 4 Wireless will offer “best-in-class sound,” 60 hours of battery life, and the latest noise-canceling tech.

Now, if you compare the battery life with the Sony WH-100XM5, the Momentum 4 is offering 33 hours extra! Now, that is definitely a win for Sennheiser. But you need to wait for the official release when it comes to how it compares with the offering from Sony in other factors.

Talking of which, Senheisser confirmed the global launch in August. And considering the fact that the retailer has already leaked the full images of Momentum, it could just take days for the official launch date to happen.