The Canadian company PSB just turned 50. And they found the best way to celebrate their 50th anniversary: paying homage to Passif II. 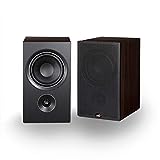 That pair of speakers is what made PSB get into the high-end market. And according to PSB, Passif II was the first speaker that defined the “True to Nature” sound philosophy.

However, the Passif II was not the first speaker that the brand released. It came out in 1974. Before that, the brand debuted the Beta II and Avante, which are famous in the retro speaker market.

So, how exactly is the company paying homage to the ever-so-famous speakers? They just released Passif 50. At its core, the Passif 50 focuses on delivering what most retro-speaker fans look for in the modern age.

That is a retro aesthetic with modern performance. The retro aspect of the Passif 50 comes from the classic 70s design. It has an open-grained walnut veneer cabinet, dedicated stands, and magnetically woven cloth grilles.

That said, there are some modern finishing touches on the Passif 50. It has a pull tab on the front grille. And that grille sports a modern-looking yet retro PSB logo. Now, if you know a little about the logo, you might already know that it was hand-drawn by Barton.

He drew the logo in his geography class that he was attending in high school. There is also a real-panel plaque that is adorned with a maple leaf. There, you will find an inscription stating “Passif 50 – 1972-2022.”

Nonetheless, there are a lot of modern touches on the design. For example, the enclosures have a good amount of heavy bracing and joints that are all mitered to reduce the cabinet vibration. The cabinet also features a dual five-way binding post to allow bi-amping or bi-wiring.

You will find the ancestor’s design even on the inside of the Passif 50. However, the components are not from the early years. Instead, PSB has opted for modern and up-to-date flagship components.

That includes a titanium dome tweeter with a neodymium magnet and ferrofluid damping. According to PSB, the magnet and the damping process will yield improved power handling, higher output, and reduced distortion.

Alongside that, the front of the dome has a phase plug. That will increase dispersion, while the felt pad that surrounds the dome is there to minimize the edge diffraction. Eventually, the pad will improve the overall resolution and imaging of the audio.

PSB has also put in a good amount of effort in refining the interaction between the passive radiator and woofer of the Passif 50.

And this refinement, according to PSB, will enhance the bass performance significantly. Also, both of them have filtered rubber surrounds and aluminum baskets to lower the distortion and smooth out the response of the Passif 50.