The top-performing Ambeo soundbar from Sennheiser was a great offering from the brand. It is still considered to be a great premium option for people that are looking for proper soundbars. 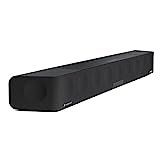 It seems like Sennheiser is planning to launch a follow-up in just a couple of weeks. The brand has sent out invites to an event at the IFA tech conference that will happen in Berlin.

The invites had a picture of an owl walking along an Ambeo-brand soundbar. This is a teasing game at its best level from Sennheiser! The attendees are welcomed to “take a walk on the wild side,” at least, according to the invitation.

Sennheiser also stated that the attendees are promised “an exciting new product announcement, new product experience” and allowed to be let into the vision of Sennheiser for the future of audio.

But what is so special about the Ambeo soundbar? It is one of the high-end Dolby Atmos soundbars that will offer you the full worth of your money. It has won many awards from different reviewers.

Yes, it is reasonably large, a bit fussy in terms of positioning, and reasonably expensive. However, when you set it right and give it a listen, you will be well satisfied with what it can offer.

On that note, Sennheiser is not the only brand you will see at the IFA event. Big tech giants such as LG and Samsung will also be there. Asus, Lenovo, and Huawei are also known for attending this event.

However, it seems like Sony will not make it to the event this time. And when it comes to Apple, they never participate in such events. Instead, the brand prefers to host its event.

Now, when it comes to audio-related stuff in the event, it is highly likely that Bang & Olufsen will announce something significant in IFA. Although, there is no information about the announcement out yet.

Jabra has also announced that they will be back in IFA 2022. And according to their announcement, they will not be in the event with empty hands.

The other brands might be unveiling their new phones, televisions, and other products they have been working on. However, none of the brands teased their products as Sennheiser is teasing here.

And from the invitation alone, you can be sure that what they are about to announce will be as huge and as great as the Ambeo soundbar.

Want to know when IFA is happening? The event is segmented into two. The Press Days are from 31st August to 1st September. And the Public Days are from 2nd September to 6th September.