After ten years, Skullcandy is back offering headsets for gaming. All gamers will be treated to three new headsets: SLYR, SLYR Pro, and PLYR headset. 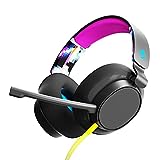 SLYR is compatible with multi-platform – PC, MAC, PlayStation, PS4, PS5, Xbox, Nintendo Switch and mobile. It’s ready to level-up your listening experience on any of these platforms. And with the 3.5mm audio cable,

The new line is compatible with various platforms at varying degrees. And gamers can now expect another level of entertainment with the headphones.

The Skullcandy series is suited to gamers of all ages and backgrounds. The last time Skullcandy offered a headphone, PYLC 2, was a decade ago, in the early 2010s.

But the scenario has changed now. A gamer can select any of the three, depending on need and budget. So, Skullcandy headphones are compatible with PCs, Gaming Consoles, and mobile devices.

But, the question is does Skullcandy fulfill the auditory needs of all levels of gamers? The SLYR headphones, priced the most affordable of the three, feature the most basic functions and specs for gamers of all ages.

The great thing about SLYR is that it includes a bi-directional mic allowing gamers to recognize focused voices, backed by premium audio technology, which yields the clearest and most intricately engineered sound.

Some other features include its light weight that allows smooth wear during the year; adaptable plug-ins to various platforms like Playstation, Xbox, and others; and the volume bar and other features that can be smoothly edited or advised in the.

The SLYR Pro, on the other hand, enhances the features of this series even more. Its Clear Voice Smart Mic system filters backward noise to give you AI-assisted, clear audio. Artificial Intelligence picks out the speaker’s voice and removes background noise.

Also, Mics in the headset and the boom mean you can communicate clearly, even with the boom removed. The Enhanced Sound Perception feature allows users to hear every distant sound detail in the game.

So what are you getting from SLYR Pro? Skullcandy confirms it comes in three different Digihype shades: blue, black, or green.

Finally, the PLYR may look like the most expensive offering. However, two unique features set this offering apart: Bluetooth 5.2 connectivity and a built-in Tile feature, a tracking technology.

Using the Tile app, you can locate the headphone through a ringing. In addition, all of them have Bluetooth 5.2 connectivity, a step ahead of the others.

Also, features like Enhance Sound Perception, in-game chat mix, equalizer controls, and sidetone, are available for desktop and mobile with this headphone.

Skullcandy software controls these features. Currently, gamers can get PLYR in black Digihype shades only.