You may know Vizio as a television brand. But, the company mainly specializes in sound bars. And they recently have two new devices in the M-series of soundbars. 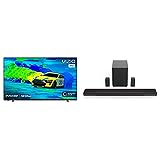 The brand debuted the M-series devices as an affordable option for home theater setups that demand Dolby Atmos support.

Among the two new devices, there is one that includes a rotating driver technology. It goes by the name of Vizio M-series Elevate.

It includes 13 different drivers and comprises a separate wireless sub, soundbar, and wired surrounds. Along the front edge, the M-Series Elevate has height drivers. Those automatically rotate to 90 degrees in order to project sound vertically for the DTS: X and Dolby Atmos content.

Aside from DTS: X and Dolby Atmos content, the drivers can fire sound forward for standard surround and stereo audio. However, the technique is not a new thing for the company.

Vizio utilized the same method for the Elevate soundbar, which came out in 2020. But that was one of the top of line offerings from the company. This time, the technology made its way to the affordable lineup.

Now, the elephant of the room is how the Vizio M-Series Elevate compares with the top leader, the Sonos Arc.

Unlike the offering from Sonos, the M-Series Elevate has support for both DTS: X and Dolby Atmos audio codecs. It also comes with an HDMI eARC, multiple HDMI 2.0 outputs that has 4K Dolby Vision passthrough, and Bluetooth 5.0 connectivities.

Additionally, the M-Series Elevate boasts a voice assistant input. That will make it easier for the users to connect the device to Amazon Alexa or Google Home speakers.

And when you use the Vizio M-Series Elevate with the Vizio TV, it will be possible to control the audio of the soundbar through the TV remote.

What about the second device from the brand? That resides in the M-Series as well. But that is an all-in-one unit with a 2.1 channel soundbar configuration.

It has dedicated bass drivers with support for DTS: X and Dolby Atmos. That all-in-one unit also has the same connectivity options as the M-series Elevate.

John Schindler, Vice Preside of Product Management of Vizio, said, “ Our new M-Series bars were built around the premise that immersive audio can and should be accessible to everyone, from simple all-in-one solutions to the awesome new M-Series Elevate.”

Now, although the second device is not as appealing as the first one, it brings a lot to the table for the price that it is asking.

Proper support for DTS: X and Dolby Atmos are hard to find at that bracket. So, if you are looking for a Sonos Arc alternative, you should consider the M-series all-in-one.