I have been trying to get the conference room set up as affordably as possible for about 2 years now. It’s hard when you don’t want to fork out for the cost of a Logitech Meetup or OWL unit.

While I am sure these devices are amazing, and in fact I have used the Logitech Meetup a few times and it does do a great job, I appreciate not everyone has $1000 to spend on a conference room video and speaker set up.

Ultimately, I was in the market for a cheap conference video camera and a cheap speaker set up that didn’t sound like garbage. 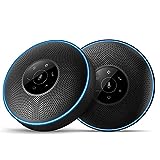 Color me impressed. The eMeet M220 is a good sounding unit that connects to allow one to be on each end of the conference room table. While the units have to be wired together for best results they do have up to 30 day battery standby so you might find you don’t need to have them powered all the time. The microphones sound good – from all reports we’ve had,
VIEW ON AMAZON
Editor’s Pick

The Nexigo N60 HD Camera is really good for the price. The picture is clear but you need to make sure you connect it to a good, not amazing, computer. The wide angle makes it a great choice for conference rooms with a long table up to 8-10 people. While there are no zoom functions it’s just a nice plug and play option for your meeting rooms.
VIEW ON AMAZON

So, what have I tried so far…

1: First I tried an old laptop on a stand (any old cheap bookshelf stand from Kmart, Walmart etc would do – it just needs a shelf). The laptop was an old MacBook Air with a built in camera. Overall, this wasn’t a bad solution but the screen was too small and the camera couldn’t see around the room so that wasn’t sufficient. The audio was OK but far from professional and no good for a group call.

2: The next step up was to use the same MacBook Air but purchase a new video camera that would connect via USB. I chose one that was quite well reviewed and very affordable as you’ll see further down this post. It did plug in without any issues but I found it was hard work on the laptop to make it work. The laptop got a little hot. This, I realised, was not the cameras problem, it was the laptop that wasn’t up to snuff. But, I decided to persevere.

3: The next thing to solve was that the screen on the laptop was just not big enough so I grabbed an old monitor, most companies have one lying around and if you don’t have one you can get one really cheap second hand online. You might even be better getting a 40″ TV or similar for cheap at BestBuy, Amazon, Walmart, eBay or similar.

For audio I already had a Jabra Speak 810 just lying around….as you do…which I used for a while but it was my own device not the companies so I took that back home and had to come up with a video conference audio solution for just the office conference room. The one I chose it also shown below and more details at the bottom of this article.

Side note, using the laptop made it easy to bring up a calendar to click on all the google meets and zoom and amazon chime meetings we had. Most solutions that you’ll connect to a TV or similar will all require a laptop or some sort of ‘slave’ PC to run the software needed.

What I was looking for when buying a video conferencing camera

The final set up

The final set up was the original old MacBook Air laptop with this camera and these speakers. The Logitech MeetUp was $1K but this came in at under $400 US.

After a few days of use I realised we needed to update the laptop as the video rate and bluetooth connection were just a little too much for such an old unit. Currently using a newer spare MacBook Pro but a small PC media server would be enough to run it.

This post was last updated on 2022-01-24 / Some images from Amazon Product API & some links may be affiliate links which may earn us a commission from purchases.