What we need is a Bluetooth smart speaker that is waterproof for the shower. I think a lot of us have our best ideas in the shower.

The shower is the place where ideas come like water falling from the shower head. Clarity, it’s like that space just before you wake up in the morning where your dreams are incredibly vivid. So too, the shower seems to be a creative space.

It’s in these moments that I find myself wishing for a waterproof Bluetooth smart speaker. An assistant who could take down ideas, someone that could take reminders, and add to shopping lists.

And at the very least, someone that can play some music to make the whole experience a little more enjoyable.

The challenges with a smart assistant in the shower are fairly obvious. The first is that you can’t run power into the shower. Another is that you need something waterproof.

I know that there are waterproof Bluetooth shower speakers, we’ve had a look at that list before here, but none of those units had a smart speaker or a smart assistant built-in.

I don’t care whether it’s Alexa, Siri, Google, or Cortana, it would be great if it hasn’t already been invented for someone to come up with an idea for this and a battery life that ensured you didn’t need to take it out of the shower every couple of days and charge it up.

It would need to have Wi-Fi connectivity to ensure that all of the voice commands that were given were sent up to the cloud. Another challenge would be the clarity of the microphones.

Obviously, the sound of falling water might help some people fall asleep, but I’m sure for a smart assistant, it is nothing but a challenge to decipher the words of people over the top of the consistent sound of water running.

Some sort of active noise-canceling built-in capabilities of the waterproof smart assistant shower speaker might ensure that there would be the ability to pick up what you say but this would therefore add added complexity to the design.

There’s very little doubt in my mind that this idea I have would probably be quite expensive by the time you built it if it did require a long battery, active noise canceling, a clear loudspeaker, suitable microphones, and to really finish the Wishlist off, it would be amazing if it actually sounded good.

I certainly know a lot of people that have put an Alexa or a Google Mini in their bathroom, but not necessarily in the shower. I would probably have to shout quite loud to reach a smart speaker that was close enough to me from where the power outlets are in our bathroom.

I also have little doubt that over time, the humidity and moisture of the room would eventually get to whatever wired device I have plugged in as a smart assistant in the bathroom.

Perhaps the water rating on the smart assistant for the shower could have even a medium IPX rating and could be hung over the top of the shower wall or hung off a shower curtain rail, allowing it to be up and out of the general water splash zone. 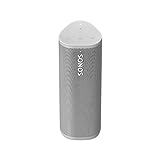 Sonos Roam for the Shower
View Price
LEARN MORE ABOUT THIS ONE?

Therefore, the IPX rating could be a lot lower and probably much more affordable and easier to build. So if anyone out there has ideas for designing something like this, or perhaps I have missed it somewhere in my travels, then do let me know.

I’ll certainly add a couple of links to waterproof Bluetooth shower speakers below for those of you that are still interested in at least having some tunes while you’re listening in the shower.