With all the technological advancements, you may have heard about 8D audio at one point.

If you’re unfamiliar with it, you may wonder what it is and what it does.

In this article, we’ll take a deeper dive into the topic of 8D audio and how it works, plus why it appeals so much to music and sound lovers.

What Does 8D Audio Mean?

8D audio is a subcategory of music that sort of manipulates your brain into thinking that you’re in a much bigger space. It’s created using a combination of equalization techniques, panning, and effects.

If a track is labeled with 8D audio, it means that it has been edited with the above-mentioned sound effects. These tracks are edited in the final mix by creating an actual 8D remix of an existing song.

The term “8D audio” itself doesn’t mean anything spectacular. Its name comes from the editing process, through which producers and music artists use software and maneuver with various stereo parts of the song within a 360-degree space.

That way, when you listen to the song with your two ears, you feel an additional space because of the rotating effect.

Basically, the song tricks your brain which gives you that perception of being at a live concert or floating in space.

Do You Need Headphones for 8D Audio?

The short answer is yes.

Even though there’s no such thing as 8D audio headphones, normal good-quality headphones will do a bang-up job. 8D audio can be fully grasped with headphones because there’s no 360-degree illusion without them. 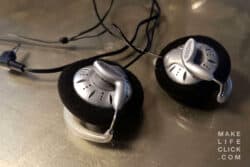 The magic won’t be present if you’re planning to listen to 8D audio on speakers. That’s because the effects will fade in the room’s space, and you won’t be able to distinguish the unlikeness of the 8D sound.

Of course, you can still listen to 8D audio on speakers, but you’ll need a room with breathtaking acoustics and a sound system for a full endeavor.

And that’s not all!

It’ll take a lot of time to figure out which sound comes from where and arrange everything. Only then can you enjoy 8D music on speakers.

What is 8D Audio Supposed to Do?

8D music should provide a genuine and unconventional experience with the same purpose as binaural beats, but their creation differs.

In case you’re not familiar with the term, binaural beats refer to hearing different tones with distinct frequencies in the ears. They’re made with special microphones that mimic real-life sounds, in contrast to 8D audio done after recording.

As a result, 8D music gives the creator much greater freedom in manipulating and creating “out of this world” sound effects.

On the whole, research shows that both 8D audio and binaural beats can positively affect your health. You may be wondering how.

They can awaken a mental state similar to meditation. This has numerous benefits as it can stimulate your brain, significantly improve your mood, and reduce any feelings of anxiety or stress.

8D music listeners report that the meditative state triggered by 8D music helps them relax as it reduces anxiety. 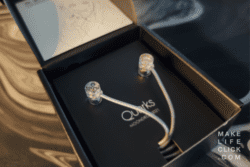 The secret behind these mental health benefits lies in including sounds lower than 1000Hz. Almost all 8D audio music is made with such frequencies.

For example, a 460Hz in the left ear and a 490Hz in the right ear alters how your brain registers the sound. The difference of 30Hz may wake up areas responsible for peace and relaxation in your brain.

So there are such things as 8D music therapy because of its various health benefits.

Here are the most commonly reported benefits from 8D music therapy and even just from casually listening to 8D music without any huge expectations:

While 8D music therapy can be good for everyone, studies have shown that these benefits are far more vital for neurodivergent people.

Why is 8D Audio Good for ADHD, Autism, and Neurodivergence?

The listening experience from 8D music possibly has a more profound effect on people with neurodivergent brains because they perceive the sounds differently from neurotypicals.

People with ADHD find it hard to focus and concentrate. With 8D music therapy, they can regain their focus so that they’re more capable to do mentally demanding tasks without losing their attention.

Meanwhile, sensory overload is often experienced by people with autism. Many autistic people have reported that 8D music has a soothing effect on them when they’re having sensory overload.

One thing to take note of is that an 8D audio song must be created properly so that it can be used for music therapy.

If an 8D audio song is made poorly, then it may cause nausea and dizziness in neurodivergent people.

Now that you know what 8D audio is, it’s up to you if you want to try it for the benefits that it can bring. You’ll either love it or won’t be so comfortable with it.

Of course, if you’re happier with stereo sound then that’s perfectly fine. Just because 8D audio is getting a lot of hype doesn’t mean it’s for everyone.

Ultimately, it’s all a matter of personal preference.