Many of you know that I have been looking for a push-button digital voice recorder for a long time. I wanted to see if I could get more thoughts down in the car when driving in the morning when sitting in rush hour traffic and having nothing to do.

I initially bought the EVISTR digital voice recorder, just based on the reviews and the price on Amazon, and was initially very impressed with the build quality, ease of use, and the nice, small form factor. I’ve done a comparison if it interests you.

However, over time, this little unit revealed a flaw to me. Lets start with some pretty pictures and the tech sum up.

Sony continue to demonstrate that they mastered the art of voice recorders a long time ago.

The Sony ICD-UX570 is a lightweight powerhouse. It’s easy to use, has everything you need and sounds excellent. While the price is higher than some competitors you really get what you pay for with this unit. It’s worth the extra spend in my opinion. And while I’m being a fanboy – I paid for this unit.

See Price on Amazon
…and another 2,499 Reviews 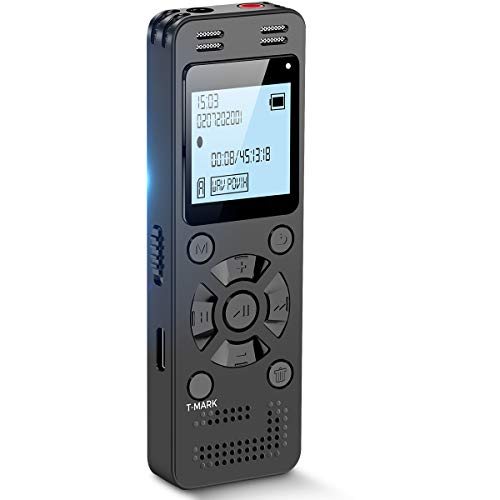 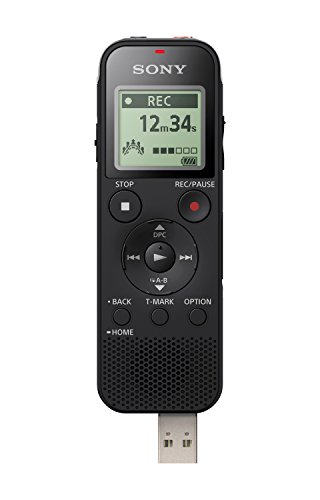 The Sony ICD-PX470 is a popular little unit with plenty of faithful fans. It’s a couple of years old than the ICD-UX570 but still performs admirably for a cheaper price. Recording lectures, dictation, music recording are all within its power.

The noise issues in the car were the only complaint I had about the EVISTR. It wasn’t the lack of features or sound recording quality per se. It was really around the fact that I do most of my dictation in the car while driving – and there lay the problem.

Unfortunately, it just seemed the microphone seemed to pick up a lot of noise from the car that my ears didn’t.

When I sent one of my files through to Speechpad, who do all of my digital voice dictation transcription (who are awesome, by the way) they complained that one of my files was almost inaudible. And in fact, some of the files I got back from them often had the word “inaudible” in them.

I’ve included some sound files further down this post you can listen to for the best example.

Getting the whole dictation process down first

Because I’d been doing transcription for a while with the EVISTR, I realized that the process of dictating in the car really was working for me. It’s a great little unit and easy to use.

I was definitely using it every morning to take down thoughts and ideas for posts, and work, and journals, etc.

So, I decided that I would commit to leveling up.

The first unit I looked at was the Sony ICD-PX470 stereo mic unit, which was affordable enough, had lots of great reviews, and looked like a really good unit.

Because I didn’t want to make just an interim improvement on what I was doing, I really wanted something that was gonna be quite superior I didn’t think it would settle the questions in my head.

And to be honest, if I wanted to get out my guitar and lay down some ideas for a song, in addition to dictation, then the Sony I wanted really needed to be able to cope with that.

So, I upgraded to the Sony ICD-UX570, and was immediately surprised when it arrived, and I opened the box, at how incredibly light this unit was.

I was a fan of the EVISTR because of its solid metal-feeling construction, and the feeling that I could throw it into a bag, or anywhere, and it would come out untouched, undamaged. The unit felt pretty unbreakable.

The Sony ICD-UX570 unit, on the other hand, was so light that when I took it out of the box, I thought surely this needed batteries in it, or there is an SD card or something missing that will make it a little bit heavier.

But as soon as I pressed the power-on button, the thing came to life, and I was blown away at how light and comfortable this thing is to use.

It sits really nicely in the hand. The Sony is a little bit wider than the Evistr, making it actually a little bit easier to hold.

And it’s not that much bigger that it would be difficult to slip it into my pocket, and take it somewhere.

The size might be slightly bigger than smaller units, but it’s really still incredibly small. And because of its weight, you really wouldn’t notice that you’re carrying it.

The voice recording quality is really impressive. It definitely overcame the issue I had driving in the car. And it didn’t pick up any of the wind noise that the EVISTR was picking up, that I couldn’t hear.

The stereo microphones were clear, and produced a sound that was incredibly easy for the transcription service, Speechpad, to write up for me.

The screen does go to sleep after a little while while you’re recording, which I’m not a huge fan of. I really like it, being able to see the screen the whole time, and I’m not really too concerned about battery drain.

I’ve wandered through the menus, and I can’t find if it’s possible to set this anywhere, so I will look that up, and if I can achieve it, great, and if not, that’s okay.

The recording indicator light on the Sony is much bigger, which I do like, because it’s a lot stronger, and gives me a much better idea at a glance of whether I’m recording or not.

A solid light means recording and flashing is paused.

The thing I didn’t realise I was missing before was audio cues. It beeps once to say it’s recording and twice to say it’s paused. I don’t even have to look at it while I’m driving to see what’s happening when I press the record/pause button.

The worst things would be to click the button and pause instead of recording and miss an amazing section of dictation.

Might be the difference between a bestselling book or not…right?

In addition to the hardware just being great, you can immediately see that there’s lots of additional features with this unit.

The pop-out built-in USB port stick is one absolute plus.

It can be a real faff trying to find cables to plug in other units to download the files, to upload for transcription or storage, but with this, the easy-sliding button down the side allows you to pop out the USB port, pop it into your laptop, and you’re good to go.

No need for traveling or carrying around additional cables, especially if you are going overseas or want to use this on the go.

The volume button is intuitive, just as a regular rocker button, and there is a hold option on this which you can engage, which basically requires you to slide the power switch in the opposite direction.

Other external features of note on the hardware is obviously the ability to also add additional SD cards, for extended recording.

For me, I’m currently using 192 kbps per second mp3 files, which is more than enough for voice dictation. If you’re traveling, and you need some extra storage, or if you think that you’re gonna be doing a lot of music recording, etc., then you might want to think about having an additional SD just popped in to give you that coverage.

Even the Zoom microphone I use for my video recordings would be perfectly suitable for this, which is a gunshot style, but very portable microphone. That’s even if you really one it at all.

The headphones would allow you to do monitoring, or playback, or transcription on your own, if you wanted to sit down and listen back to what you’d been talking about.

Let’s say you’re on a trip overseas, and you do a lot of dictation on your commute to the airport, and once you get on the plane, you just need to plug in your headphones and you can sit there on your laptop and bash out all your great ideas on how to take over the world.

If you are on the go, there’s also a nice wrist strap corner arm, that you could slip a wrist strap holder through, which would enable you to carry this around anywhere. Of course, it’s so light that I’m not sure that you would need to worry about that, but it’s certainly another nice touch.

So how does it sound. Well, here are a couple of sound files which will let you hear how good it sounds. It’s a nice, warm sound with good stereo response.

Sony ICD UX570 Sound test in a quite environment

The Software is excellent

This is a great feature, I believe, especially if you’re doing interviews in tradeshow halls, or somewhere where there’s going to be a lot of external noise.

It’s been working so well in the car that I haven’t needed to adjust the microphone sensitivity.

The skip buttons that include a minus 3 or plus 10 search option, the ability to jump through, using the jump button, jumping through audio recordings, makes it so much faster to use.

Also, just the general controls in the software of moving files around, adding new folders, splitting up files, it’s just, there’s so much you can do in this unit that makes it really powerful, and you can definitely start to see that Sony do excel in this dictation market with the hardware that they sell.

It’s not just about the hardware. They know it’s also about the software. It has to be easy to use, and it has to give you what you need to do on the go to come out with dictation voice files that are functional and easy to work through.

You can time mark sections in your recordings, which might make it easier for you when you’re coming back to them, to jump to areas that you really want to listen to. The software really is quite well-thought-out.

I can’t say enough good things about this unit.

The battery life, the weight, the file storage options, the microphone and headphone capabilities, the built-in USB stick, the software, the overall sound recording quality, the nice, lightweight feel to the unit, in addition to very easy-to-use buttons, make this an absolute top pick for me.

I would not hesitate recommending this to anybody out there that’s looking for a quality digital voice recorder, and you’re not afraid to just level up the price a little bit. I wouldn’t hesitate buying any other unit than this if I was to do it all over again.

So, if you are doing voice recording, recording a lecture, you want to take down some simple song ideas, or play guitar or piano or anything, then I would definitely say this is a great unit to consider for getting it all down.

Any questions let me know!

This post was last updated on 2022-12-07 / Some images from Amazon Product API & some links may be affiliate links which may earn us a commission from purchases.