Working from home is something almost everyone has had to do over the last 6 months, whether they wanted to or not. Zoom meetings, Google Hangouts or simply connecting with family on Facetime are all things many people are now consistently dealing with.

The Tonor Microphone TC-777 model is designed to be easy to use and easy to plug in.

It’s as simple as plugging in a USB cable. 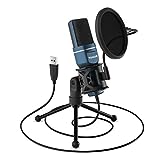 The Tonor USB condenser microphone is amazing quality for such a small affordable unit. It definitely punches above its weight and we wouldn’t hesitate to recommend it as an excellent choice for Gaming, Zoom conference calls, Podcasts, home recordings and more.
VIEW ON AMAZON

An important aspect of living in this new online world is audio quality. There is nothing worse than listening to someone with loud background noise, like they are speaking from inside a tin can because they’re using their laptop mic.

You don’t want to be that bad audio person, which is why many people often opt for a USB microphone. This is where the Tonor TC-777 mic comes in handy and ready to go.

Having a quality USB mic is helpful for videoconferencing, but also for other aspects of the online world. It is good for podcasting, video voiceovers, as well as any type of audio recording or presenting from either the student or teach perspective.

A good microphone kit means all of these things are easier to accomplish. You don’t need expensive microphones to achieve good sound quality!

The Tonor microphone is a good mic that comes in under $40 and offers a great plug and play ability. If you aren’t the techy sort and don’t even know what a cardioid or condenser mic is, this mic is meant for people of any skill level.

This one will work well for you since this particular mic doesn’t need any technical knowledge of an audio interface toset it up and begin using it.

The hardest part of setting up this Tonor TC-777 mic is opening the box. Once you have it open, then there is an easy-to-use guide that is multi-lingual and has lots of good pictures to help guide you through any set up that is required for both a Mac or PC. 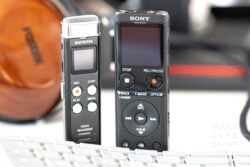 Along with a good instruction set-up guide, there is also a pop stopper (also called a pop filter). This is something most are familiar with if you have ever seen a music recording studio. A pop stopper is basically a piece of nylon stretched around a small frame to help stop the hard P or S sounds that come from air hitting the microphone and making the sound of a pop or hard S.

The Tonor mic comes with a round pop stopper, and is easy to screw onan adjustable arm that lets the user set it to a position in front of the mic so it stops any harsh sounds from happening while you are speaking or singing.

Along with a standard pop stopper, the Tonor TC-777 also comes with a wind stopper (or wind sock). This foam-type item is put over the mic to reduce any outside air movement sounds.  If you are recording audio outside, a wind stopper will reduce the wind sounds that come from air rushing across the mic. Cardioid mics are quite sensitive so this will be important if recording anywhere there is significant air movement.

Another benefit that comes with the Tonor TC-777 is that it has been preloaded in its own tripod stand. This is similar to many other studio mics that have a spring-loaded shock mount that helps reduce excess noise if the mic is moved. The Tonor is protected by this setup, reducing harsh movement so scraping and additional noise are diminished due to the reduced motion.

With the mic being preloaded, the only hardware setup needed is the pop stopper and/or windstopper. The tripod works well, as you simply unfold the feet and adjust the angle of the mic for use as needed.

The Tonor is a cardioid micthat needs the user to be direct when speaking into it. The front of the mic where the logo is should be the focus of speaking as it there that it picks up sound. While the signal can also be picked up a little bit from the sides and the back, the front should be the focus.

The great thing about this mic is its positioning versatility for better sound. You can take off the tripod easily and the bracket and mount will then fit on a disc arm microphone stand so it can come down from above for a better position.

Other than deciding on how best to position the mic, the only other thing to do is to plug in the USB cable into the computer and switch the microphone setting to Tonor. This change of setting is simple too, just follow the instructions that came in the box. Once this is done, the mic is ready to use.  Quality hardware, no extra work, plug and go, at a great price. The next part of the discussion has to be about sound quality.

This Tonor mic will work for those who are working from home, who don’t like to use a headset, would simply like to have better audio on calls or want to do some basic podcasting. When it is compared to the MacBook Pro laptop mic, the Tonormic shows its depth. The MacBook holds a thinner and tinnier sound while the Tonor mic is much fuller in tone and warmer sounding as well.

The sound when working with a Mac is clear but lacks the depth of the Tonor mic. The low end of the sound is better on the Tonor and certainly has enough quality to support a person in podcasting get off the ground. For a mic that is under $40, it offers some quality sound.

While working with voice audio is one thing, instruments are another. Doing home recording is becoming more prevalent as people are less anxious to go into studios.

The Tonor mic allows some adjustments for instrumentation such as reverb to fill out the sound further. It offers some quality sound overall. You won’t get the fine detail and nuances that a higher-priced mic will have but for $40 it offers a lot.

The Tonor TC-777 is a good mic that is simple to use with its open, plug in the USB and its ready to go. It works for both vocal and instrumental audio. It is certainly a step up from the computer mic.

With a little bit of time spent working on audio adjustments, the sound will be good and will make all audio work much more enjoyable to listen to.

Tonor Microphone TC-777
Build Quality
Sound Quality
Value for Money
Accessories
What we like (Pros)
Excellent value for money
Good build quality
Ready to go packaging
USB for plug and play
What we like less (Cons)
None at this price
4.9
See more details