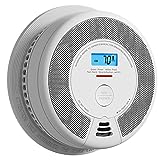 We use a Google Voice translation engine for our video transcriptions so it might be hit and miss.

Hey guys. Mark again. Hey guys. We always say hey guys, I don’t know what a better and true is for YouTube videos and hey guys but hey guys here we are another 4 minute down where I give you a product review in 4 minutes or less with as few cuts as possible to save you time and me time and get to the point quicker. So today we are looking at the Xsense interconnected wireless smoke and carbon monoxide detectors. So let me see. If I can show you one of these up close, that’s gonna be flashing. I’ll turn it on in a minute so these things are pretty cool so when they said hey wireless so ecent sent me these to give you my opinion on them.

So Full disclosure there, they’re quite a big unit like they’re not particularly streamlined. I had some from the hardware store which were little, but there’s some standout features of these and one of them is obviously the 10 year lithium sealed battery, so these things are good for 10 years so. You know, whereas you know you might have a routine like my father-in-law where he kind of every April’s fool April fools. He goes around and and replaces all the batteries in his alarms. With these ten years don’t need to do it bonus now they also do not only smoke but are carbon monoxide.

So and they have a real time carbon monoxide display on the front. So if I just wait this little unit up a little bit, you might be able to see in there. Let’s see if I can get the it’s pretty going to beat me now. Here we go. So it’s going to probably do a test. And it’s up. It’s so much fun. Right, so it’s it’s running a test. It’s still running a test actually right and then we get a pass. So that’s the testing. So you know it’s going to run through all the bits and pieces.

It’s incredibly loud. Obviously, I have my finger over the thing there as much as possible, but I’m sure that’s still blow out. Blew out the microphone. Unfortunately, it flashes green intermittently just to tell you that it’s healthy. And then there’s a whole range of orange and red variations you can get, and the manual that they include in the box will tell you all about that. So yeah, OK. It’s a. What’s wireless about it? I can I connect it to my wifi or can I connect it to? You know, my smart home? Well, no, but you can’t connect them together.

So let’s say that you have quite a large house you can. You can link up to 25 of these units. So I have three in the house. They’re all linked together, so if the one in the kitchen’s going to go off, then because it’s linked to the other two, all the others go off at the same time. So unlike a more traditional smoke alarm that you buy from, you know your local hardware store and you stick it up, and it’s got a battery and you put another one up around the house and or and they’re all over the place. That but one of one goes off, then it’s like, OK, I went off, but the other is like a well I can’t smell anything.

So why should I go off with these? As soon as one goes off they’re linked wirelessly and they’re incredibly easy to link to you. Just press like four times on this and then twice on this. And then they connect. And then you do it again and you connect another one and then all 20 up to 25 length. So I love that because you know if there’s a fire in the kitchen, it’s not long.

If you’ve seen how fast houses go up, it’s super fast. Like check out some YouTube videos on Excel, so whoa. So you want as many people in the house as quickly as possible to find out what’s going on so. Because they come as they are, they’re pretty much ready to go. There’s just a little switch on the back there that you need to turn on to turn the unit on. You can do the quick and easy pairing if you’ve got multiple units, and then at the end of 10 years you will get warnings when it’s going flat. So unlike you know.

Oh man, I hate it when you’ve got a normal, it’s three AM in the morning and his beep beep, and there’s nothing frozen, beep beep and you’re like, Oh my gosh, smoke alarms going flat and even change the batteries. So I figured this will only happen every 10 years and I’ll go beep beep so we’ll go beep beep when it’s going flat so you know that it’s the end of life.

And then there’s a switch on the back. Where you can set it to end of life. That’s it. The accents are carbon monoxide and smoke combined wireless interlinked smoke alarms are pretty affordable. And you know accents have loads of other cool products as well, some really good looking hub style products you can check out on the website. That’s it from me. 4 minutes. Have a great day, stay safe, enjoy yourself whatever you’re doing and see you next time.