I do a lot of dictation in the car. I sit in traffic quite a lot in the mornings, and it just seems to be the best time for me to get things down.

I can’t type while driving, that would be silly.

The voice recording apps on my iPhone are not up for the task of managing long dictations. Otter.ai is good but not for this kind of long form voice recording And so in addition to the need for safety, it seems much easier to use a voice recorder for dictation, where I can simply press pause and play on the device to get what I need to be done.

There’s no faffing about with screens or touch interfaces.

It’s a very hard, tactile experience, and therefore, I can focus on the traffic and driving while I’m getting some notes down.

I recently reviewed the EVISTR digital voice recorder, and overall, I gave it a really good write up.

It’s an awesome little unit, except for the way I use it 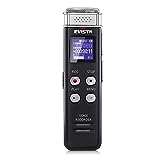 A small and compact unit digital voice recorder perfect for personal use, meetings and interviews and with an excellent battery life and tough build quality.

VIEW ON AMAZON
View on EVISTR

There were very few complaints I had about it.

And the one complaint I did have at the time has been resolved since. And that is if I leave the screen on, it won’t go to sleep on me when I’m talking for long periods of time. Not unlike a lot of my friends and family after a couple of whiskeys.

Recently, the company I use for transcription sent me an email and told me that they had to send the file to their very best transcribers because the audio quality was so bad that there were a lot of things that they couldn’t hear.

This is how the EVISTR sounds (while traveling)

Now, before you throw in the towel on the EVISTR, I should clarify that this was only because the microphone was picking up too much of the car noise.

If you’re using the EVISTR in any other situation, such as interviews, or recording notes at your desk, or any other situation where there is a lack of engine, background and wind noise, then I would wholeheartedly still recommend it.

And it’s possible that you could get a headset with a microphone that would allow you to perhaps mute down some of the ambient noise that comes through in the car.

So my biggest, and only complaint really about the EVISTR digital voice recorder now, is that it fails to offer any external noise cancellation; I’m not sure I can adjust the microphone sensitivity.

Now, this is a double-edged sword.

If I was interviewing someone in a large, possibly even noisy environment, I would not want a voice recorder that silenced so much of the noise that I had difficulty listening to the interviewee.

But at the same time, I think the microphones on this are so sensitive with no apparent passive noise cancellation occurring on the microphones that it really does pick up all the noises going on around it.

I’ve listened back to a few of my recordings, and I must admit that they do sound very noisy in the car, and the microphones are incredibly sensitive.

This probably isn’t a deal-breaker for you if you aren’t trying to do dictation on a plane, or in a car, or on a train, but for those of us that may be on the move, it poses a slightly more challenging voice recording experience.

For this reason I’ve upgraded to see if my new Sony model is better, more on that below

My impression and overall review of the EVISTR will still remain high though. As for the price, it is an incredible little unit. I love how small it is and how easy it is to operate.

If it wasn’t for the fact that I’m trying to do this in my car most days, and that the microphones are picking up on that sensitivity, that I would not have looked elsewhere.

Unfortunately, though, it’s no good for me if my transcription service is writing to me telling me that my audio files are a bit rubbish.

I must say, hats off to Speechpad for making such a massive effort to ensure customer satisfaction by escalating the difficult files up to more experienced transcribers.

My next move will be to a Sony voice recording unit (Sony ICD-UX570), of course, which I’ll provide some feedback on once it arrives. It should be here next week. And as I dictate pretty much daily at least one or two pieces of long information, it won’t be long before I have a good feel for what it’s like.