The famous electric manufacturing brand HIFIMAN is about to announce two new product launches at CanJam NYC. The announcement may come within this weekend. According to the sources, both products are desktop amplifiers named by mode HIFIMAN EF400 and HIFIMAN HM800.

The EF400 desktop DAC/amplifier is the only desktop model amplifier designed by the company in the last 10 years. It will come with some unique features and offer better quality than the existing crowd of amplifiers in the market.

Apart from it, there is another model, HM800, which is a balanced mini amplifier. Both DAC/Amplifiers feature the architecture of the HIFIMAN Himalaya R2R DAC.

The completely balanced EF400 has been brought as a tribute to the renowned EF6. It has also come as a statement of current audio technology. It incorporates the company’s innovative low-energy, high-sampling HIMALAYA R2R DAC, which utilizes an array of extremely precise resistors and a conversion mechanism called the “ladder.” This method is intended to transform the digital signal with the greatest precision possible.

The EF400 consumes the barest amount of desktop or rack space possible. The front panel has four balanced outputs – 6.35mm unbalanced, 3.5mm unbalanced, 4.4mm balanced – as well as a function switch. The rear input panel has RCA, USB-B, and USB-C source connections and twin XLR three-pin balanced line outputs, which are uncommon in devices at this price bracket.

The DAC module is a feature that both modern amplifiers share. When creating the EF400 DAC/amplifier, HIFIMAN put equal focus on performance, adaptability, and simplicity. The four-channel architecture is properly balanced and incorporates the company’s HIMALAYA DAC module. This differential module supports the standard PCM signal provided via the most popular IIS audio interface with a maximum resolution of 24Bit.

The HIFIMAN HM800 is a compact mini-DAC that also includes the company’s innovative low-energy DAC module. The HM800 DAC/amplifier is based on the R2R architecture, which is a chip made of a full array of resistors, but with a novel algorithm that decreases the amount of power handled by the peripheral components.

HIFIMAN’s novel NOS filter differentiates itself from earlier versions by decreasing noise without weak signals into the ultrasonic frequency region. The signal-to-noise ratio is 112dB, with the output power being 40mW+2, and overall harmonic distortion plus noise is 0.0025 percent for the DAC module. 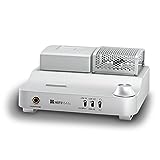 A powerful hybrid headphone amplifier and integrated amplifier. Serve as a hybrid power amplifier to drive speakers of moderate.

Designed to transform any smartphone into an audio source, the HM800 has a low audio frequency range, reduced out-of-band noise, and low battery consumption. Internally, the DAC module supports the standard PCM signal provided via the most popular IIS interface, with a resolution of 24Bit.

The HM800’s diminutive dimensions, around the size of a US quarter, make it very portable. Additionally, HIFIMAN prioritized versatility, including a USB-C input and four bundled cables for use with the majority of high-end headphones on the market.

The CanJam NYC will take place in New York this weekend. Inauguration of different ventures and launch of many new products and features will be announced that day.