In-ear monitors (IEM) are specialized headphones that musicians use during concerts. They’ve replaced stage monitors for a few good reasons.

You’d be hard-pressed to find a musician today who would still use stage monitors.

The Origins of IEM

According to soundlightup.com, a sound engineer named Chrys Lindop was looking for ways to make improvements to musicians’ on-stage experiences. Chrys worked with major stars, including Bjork, Stevie Wonder, and Elaine Paige. He tested his new idea of what would become in-ear monitors by running experiments on some of the musicians he worked with.

Hardware House’s George Glossop helped with some of his earliest experiences. Chrys tested his first wired-in ear monitor on Howard Jones and concluded that he was onto something promising. While Howard performed with the in-ear monitor, George performed without one.

After both performances, they determined that in ear monitor was the way to go. But the wires were inconvenient for musicians.

By the end of the 1980s, plans were underway to make ear monitors wireless. This was, in large part, inspired by Stevie Wonder. As a blind musician, he had to stay at the keyboard, and this was a problem for Stevie. 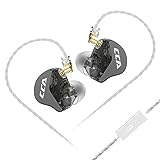 He wanted to be able to freely move around during his performances. So Chrys promptly created in-ear monitors that didn’t need to be attached to anything. This way, Stevie could hear the music and still be able to communicate with people backstage.

In the early days of in-ear monitors, Jerry Harvey customized a pair for Van Halen’s drummer. Based on this, he went on to create his own ear monitor business called Jerry Harvey Audio.

How Do In-Ear Monitors Work For Singers?

In-ear monitors offer singers a lot of benefits. One of the biggest things is that it makes it easier to hear their own voices on stage.

When you can hear your voice, you can make sure it’s at the perfect pitch. It also makes it easy to listen to instruments, which helps in creating a unique mix.

But maybe the biggest benefit of ear monitors over stage monitors is that they are not as likely to damage your hearing. The noise-canceling headphones let musicians perform throughout their entire career without ending up hard of hearing, or worse.

The beauty of in-ear monitors is that they don’t prevent you from being able to hear the music, but do cut down on the annoying background noise that can be way too distracting.

How Are In-Ear Monitors Different From Ear Buds?

These days, pretty much everyone uses headphones and/or earbuds. Even though in-ear monitors look like earbuds, there are some differences.

You wouldn’t know it by looking, but where earbuds have a speaker driver in each ear, in-ear monitors have at least three in each. The drivers in-ear monitors are much smaller, and they’re designed to give off low frequencies only.

The three or more small drivers are what give in-ear monitors superior sound quality. The IEMs that professional musicians use can have as many as eight drivers in each. They also have separate cable connections, whereas your typical earbuds sometimes have one cable connection in one earbud; some don’t have any at all.

The way you wear in-ear monitors is not the same way you’d wear a pair of earbuds. With earbuds you never see cables. But pay attention the next time you see a musician in concert; the cable goes down their backs but is also looped over their ears.

An IEM typically has three different types of drivers;

The electrostatic uses static electricity and makes an electric field. The stator plates on the driver let air through while one plate is negatively and the other is positively charged.

Also ReadWhat To Consider When Buying Headphones For Running

Sound signals hit the plates and form an electric field that’s used to create sound waves. And since electrostatic drives are made the way they are, they are ideal for picking up a wide range of frequencies. Electrostatic drivers are also known for their treble extension.

The balanced armature drivers were originally used just for hearing aids. They are small enough that you can put a sufficient number of them in an IEM. Each driver is tuned for a specific purpose, like bass, treble, and midrange. The drivers have a crossover in them that splits up the sounds so each sound goes where it needs to.

These drivers don’t have a lot to offer as far as bass, but they are excellent at producing mid and high sounds. But an IEM driver needs like this one needs damping material to avoid distortions and vibrations that lessen the sound quality. This is why IEMs work as noise-canceling headphones.

While balanced armature drivers don’t carry bass sound very well, dynamic drivers do. You may not use one of them, but they are essentially the same thing as a midrange or tweeter speaker. 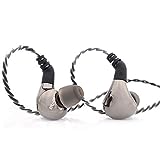 Part of a dynamic driver is its tiny diaphragm, shaped like a cone. The cone has wire coiled around it, creating a magnetized coil. Receiving an electrical signal causes it to form a magnetic field, moving the diaphragm in order to create sound.

The diaphragm and vent in dynamic drivers are what make them great for bass. The makeup of a dynamic driver means that music played at too high of a volume will be distorted. This ties into the reason why IEMs are ideal for preserving musicians’ hearing.