Klipsch is pretty well-known for making massive speakers. In fact, if you take a look back at their early days, you will find refrigerator-sized models! Those cinema sound models relied on horns to generate the maximum sound output. And the use of horns was pretty common during that time. 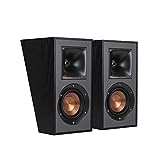 Even though the brand still utilizes horns on its speakers, Klipsch is now looking at new ways to deliver compact and non-intrusive speakers. And the brand plans to offer that in Dolby Atmos soundbars.

Although Klipsch-based systems are not that popular among people looking for a home theater setup, Dolby is ubiquitous. Your laptop’s speakers probably have Dolby Atmos.

However, the speaker units of laptops are not that large. And even for the soundbars, brands collaborating with Dolby could not shrink the size to a high amount. That is exactly where Klipsch wants to step in.

In the press release, Klipsch stated, “a strategic partnership to develop a new line of Klipsch home audio solutions integrating Resonado Labs technologies.” Now, the question that stands is who is Resonado Labs? Also, what do they have to do with a speaker with their technologies?

According to the founder and CEO of Klipsch, “Identifying an opportunity to deliver full-frequency sound in small form factor speakers led to the development and patenting of our core technology.”

And this tech from the Klipsch-Resonado Labs alliance plans to define the next era of audio technologies. They aim to offer a line of products that are engineered to provide the highest output in a smaller package.

In short, the speakers and soundbars from Klipsch will get pretty small. And considering the potential that the Resonado Labs technologies have, at least according to the CEO, these speakers can bring new competition to the market.

If you look around the Resonado Labs site, you will see something called Res-Core. According to the website, it is a “precision-driven motor design featuring a flat voice coil suspended in between dual parallel bar magnets.”

Furthermore, the unit’s motor “is controlled by a high-performance suspension system that enables the speaker transducer to maximize pistonic movement to push a massive amount of air for the deepest, cleanest bass.”

In other words, the voice coil of Res-Core will focus on being as space-saving as possible. And the suspension of the motor will allow the compact transducers to generate a type of bass that you would generally expect from a large-sized driver.

That means the audio performance will not degrade, even though the overall package is shrinking massively.

That said, there was no discussion regarding any specific product. However, there was a mention of “Cinema One” in the virtual press conference of Klipsch. That is leading many to believe that Klipsch-Resonado Labs will first offer Dolby Atmos soundbars before any other standalone products.