It seems that KZ is on a bit of a movement to update some old favorites in the last 12 months.

We’ve had the KZ ZEX updated to a KZ ZEX Pro (or Crinacle, as it’s also known), which was an impressive update, converting it into a tribrid driver, with a balanced armature dynamic and electrostatic driver, all in a very affordable package, which resulted in really quite a tasty listening experience. One of my favourites.

The AS16 was originally 16 Balanced Armature Driver, with eight balanced armature drivers per ear.

The new 2022 AS16 Pro, still have eight balanced armature drivers per ear, but also has a whole new casing and tuning, which has served to improve them even from the original.

With the AS16 Pro, KZ have given an update to the AS16. The 8 balanced armature drivers make for a full sound spectrum audio experience. Lots of highs, lows and mids with the brightness that BA driver bring.

The bottom end is full, rich and warm.

While the mids can be a little overwhelming over longer sessions, and the fit isn’t quite as snug as other KZ models like the Zex Pro and Zax, these are still an awesome listen for less than $80.

These will stay in my collection.

See Price on Amazon
…and another 7 Reviews

First impressions of the AS16 Pro is a lot like all other KZ IEMs.

It ships in a simple small black box, which I appreciate because they don’t overdo it necessarily by making the box bigger than it needs to be for such a tight pair of IEMs.

Once you open them, there is a nice display of the two in-ear monitors sitting in the case with a metal badge, and then underneath that, you’ve got your additional silicone ear-tip sizes and the cable, plus a manual to boot.

The cable is pretty much in line with all of the other KZ series in-ear monitors, although I’m not sure that the ZEX Pro didn’t have a slightly thicker cable when I’m holding them next to each other, although it might be my imagination.

The build quality is equally high.

I think one thing that KZ has definitely done over the years has perfected the art of creating a very consistent build across all of their IEMs. 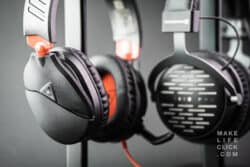 The casing is smooth and well machined, and the AS16 Pro have something different, which is a really nice external diamond-shaped honeycomb design, which flickers and sparkles as the light hits it.

At first, I wasn’t too sure, but it’s actually not gaudy. It actually looks really quite nice, as you’ll see in the photos.

The cable can be upgraded, if necessary, as it is a standard 0.75 mm, two-pin cable.

The driver configuration of the eight balanced armature drivers per ear is assigned as follows.

The bass on these is really nice and there is definitely a good sub-bass bottom-end on them.

It has that warm, balanced armature driver feel through the bottom-end, and if you have a love of bass, then these will suit you, although there are other in-ear monitors out there that allow you to feel the bass a little heavier.

The bass is definitely quite natural, not inflated. So, if you’re looking for something akin to a subwoofer in your ears, these will not suit you.

But if you do like the feel and the richness of full natural bottom-end, without it being particularly overinflated, but still a nice, tight, true feel, then these will suit you well.

The acoustic kick on a drum kit is the kind of sound that makes these really show their quality and anything that includes dance, house music, or deep keypads, will also resonate.

When I say house and dance music, you may think that I’ve just said there’s not a lot of bass for bass-heads, but there’s plenty for anyone that isn’t looking for something where the mastering engineer has just pushed up the bass faders on the output of the mix.

As a comparison, I bought my custom in-ear monitors, which were Heir Audio, about eight years ago.

These were designed by John Moulton, AKA the Wizard, who now runs and owns Noble in-Ear Monitors, with his brother (legend).

These were a relatively early commercial model for John and I’m sure that he has continued to improve his craft, but these cost me around $1,300 at the time, and these AS16 Pros will cost you less than $100, for a similar driver configuration, and a sound that isn’t a million miles away.

In the words of KZ themselves, they have said the Chi-Fi movement is alive and well, especially with these in-ear monitors.

Vocally, these things are really quite exceptional, for the price.

There is a ‘but’ coming. Wait for it.

It just sounds so close and so real, and while it isn’t particularly breathy, it does vocals a great justice.

There’s no V-shape tuning here, it really does pull a full spectrum of balanced sound between the bass, the mids, and the treble.

In fact, the mids probably sit a little more forward than the other frequencies, if anything.

Listening to “11 Minutes” by Halsey and Travis Barker, not only does the bottom end absolutely stand out, but the vocals themselves sound brilliant.

“Carolina” by Taylor Swift allows the acoustic and the vocals to sit right up. And again, this is a track where you’ll feel like you’re almost sitting next to Taylor as she sings it.

Listening to some rap, the likes of NF, it feels like he’s, again, right up on the mic, and you can hear him as if he was next to you in the studio.

The criticism I have on the mids is even as a guy who loves vocals, and guitars, and having the mid-range stand forward and really shine, in my headphones and in-ear monitors, I do find that the mids over long listening periods can be a little fatiguing.

It’s not that they’re particularly sharp or abrasive, but they are quite strong in the mix.

I do really like it, but there is something that I can’t put my finger on where it just feels a little too forward on certain tracks.

But it is natural, I have to give it that. 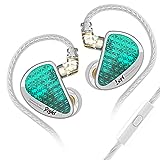 Treble, like the bottom-end, sits exactly where it needs to be, and is not particularly harsh or sibilant, and overall, anything that I presented these AS16 Pros with, sounded really nice at the top-end (I actually like a little sssssibilance).

There’s a nice zing to acoustic guitar, and there is some really nice drum symbol and snare high-end feels, depending on what track you’re throwing at them.

It does seem quite apparent that the upper mid-range and treble benefit from the four drivers that have been given them. But I do wonder if you’d taken one of those drivers and stuck it down the bottom, or even in the mids, to give it a little bit of lower-mid or upper-bass, it might have just perfected these a little bit more.

I have found with these headphones that they were incredibly easy to drive. In fact, it was quite difficult for me to get a good balance on my iPhone, there was almost an unnatural step between too quiet and too loud.

Using them with my FiiO A3 Headphone Amp was a lot easier because I could dial the volume in smaller steps. And listening to them through my MacBook also allowed me to make smaller steps through the volume range.

As I say, when you can get the volume just right, these things just work. I just found that there were times I had to have the volume possibly a little louder than I wanted for it to reach that perfect balance of bass, mids, and trebles.

I know that sounds a little strange, but that’s the only way I can describe it.

The sound stage is great. I lay back on the floor of the lounge on Sunday afternoon and plugged them in, and just listened to the nice open sound stage that these present, with excellent guitar frequencies bouncing between ears, and all sorts of other exciting things happening the way the mixing and mastering engineer wanted them to happen.

Side note, I would also appreciate these as a classical music listener, as the placement of instrumentation is really great.

Summing it all up

Overall, the AS16 Pro is probably the best thing I’ve listened to in wide IEMs in months, if not at least the last year.

Eight balanced armature drivers are hard to stuff up. And while I have criticisms about the mid-frequency being both amazing and a little bit too much at times, that dichotomy is easy to push away with the general great sound of these.

I think KZ knows that the original AS16 was well-liked, and the KZ AS16 Pro will also be well-liked.

There could be times it will depend on what you throw at them, but overall, the full sound stage, and the full frequency range is all really there, especially at a price point so affordable.

The build quality and styling are attractive, and while it might be polarizing for some, it’s a pretty good-looking unit.

Questions? Fire away in the comments below and I’ll answer anything you want to cover.