To celebrate its 50th year anniversary, Technics has decided to bring out a special version of the SL-1200 series. Technics plans to hold the live event on April 7th, 2022, and the fans will be capable of learning all about the new SL-1200M7L, which is the 50-year anniversary model of the OG series.

The original model, which is the SL-1200MK7, came out in 2019. It continues to inspire generations of DJs. And now, the new anniversary model will bring seven limited-edition colors. All of the available colors have one goal: to reflect the street culture of the DJs.

To do that, Technics has first focused on the tonearm. Instead of having a boring anodizing, it is now anodized in a golden hue. That will bring some bling to the turntable. No matter which color option you get, you will notice the same tonearm. And it blends well with the color options that the special version comes in.

Latest News: Wanted Budget-Friendly Powered Subwoofers? Crutchfield Has Got Your Back!

But that is not the only flare that the anniversary edition has to bring to the table. On the top panel of each, you will notice a special badge. It will have an engraved serial number, representing that the model is a limited edition.

Furthermore, the turntable will come with special accessories. That includes a slipmat that has a 50th-anniversary sticker along with a gold-colored technics logo. And when it comes to availability, only 12000 units will be available globally for the new 50th-anniversary model.

Now, when it comes to the features, the SL-1200M7L is still based on the SL-1200MK7. That means you can expect to have the same features as the SL-1200MK7. And among the seven colors, there are red, blue, black, white, beige, green, and yellow.

Additionally, the new edition has a coreless direct-drive motor. Thanks to that, it achieves a powerful torque and a stable rotation that is free of cogging. The tonearm is highly sensitive yet robust. It can read the signal engraving on the grooves with higher overall accuracy.

Moreover, there is a two-layer structure platter. It can provide an improved overall damping performance. Also, you will find a high damping insulator and high rigidity cabinet for a thorough shut-off of vibrations. Thanks to that, even during harsh operational conditions, the vibration level will be minimal. 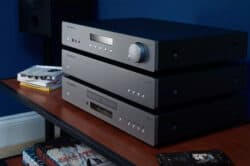 You will even have total control over the rotation. There is a starting brake/torque brake speed adjustment mechanism. The new edition even has a pitch control function, enabling stable and accurate pitch adjustment. It even has a reverse play function that will expand the overall flexibility of the DJ.