[EXCLUSIVE OFFER] MLC have partnered with Ultimea
to get you an exclusive 20% off.

Admittedly, I’ve never been a huge sound bar consumer. It’s not that I don’t think they’re an incredibly effective way of filling a room and improving your media, TV, and movie-watching experience, but I’ve always still gravitated to the full surround sound experience of at least a 2.1 or 5.1, and now 7.1 setups.

But I do have a TV in the studio, which is also used for gaming, and a bit of TV when everybody needs some separation from the kids. And the TV speakers are okay, but of course, you can always do better.

When Ultimea reached out asking about me looking at the Tapio I Pro, I was more than keen. It seemed that it would be a perfect addition to the studio TV, and provide some real lift to the audio experience.

The Ultimea Tapio I Pro is a great little unit if you’re on a budget, plan to use it in a smaller room e.g. bedroom or need something that is affordable for both TV and Music.

While it doesn’t have a lot of bottom end punch it does really help clear up vocals and make TV watching easier.

You can pair it with your smart phone for use as a Bluetooth speaker also.

See Price on Amazon
…and another 5 Reviews

When I first looked at the Tapio I Pro, and plugged it into the TV, I made some pretty quick assessments on who this soundbar is perfect for. Its size, form factor, and sound quality will suit certain situations combined with people’s budgets.

The first thing to note is that this soundbar is not a full-size, full-length soundbar, but it comes with everything that you’d expect from a TV soundbar.

Unboxing the Ultimea Tapio I Pro

The unboxing experience was good, and I think the surprise and delight experience came from the fact that this thing was better made and better equipped than I expected. On first opening the box, I noticed the easy-to-access controls down the end of the soundbar.

The overall finish of the unit was quite attractive, and the mounting options included a bracket for wall mount and for placement on a table or media counter with your TV, if it’s not wall-mounted. I was also initially impressed with the included accessories, which also included an optical cable, which I didn’t expect.

The setup was very easy, and the Tapio I Pro comes with an easy-to-follow wiring diagram sticker on the back of the unit itself, in addition to the user manual.

There are a few different ways you can connect this to your TV, and they do recommend that the best version is to do it via HDMI, and then select which channel on your TV will be the HDMI out for audio. You can also connect it through RCA cables or the included optical cable in the box.

The HDMI cable doesn’t come with this unit, but the other cables do. HDMI-out options are pretty common on most TVs, and I’ll include some screenshots here that show you what it looks like on mine.

This makes it enormously convenient. If you go the RCA route, then you’ll need to set your TV audio out to that, and the same for optical.

So, once the HDMI cable was plugged in, and I had powered the unit and set the HDMI one out on my TV, I was ready to go.

Using the Tapio I Pro

The Tapio I Pro is very intuitive if you’ve ever worked with any kind of audio or soundbar for your TV.

In the end, there are media controls for the skip, play, and pause, if you’re going to use it just for music listening. And for TV, you can switch through the modes on the device itself.

You can also quick-change through all of the listening modes, including TV, Bluetooth, optical, and auxiliary.

There are some not unattractive LED lights at the front, which act as a display to tell you what mode you’re in. For example, if I turn on my TV, then the LED lights will show ARC, meaning that the HDMI is connected.

If I switch to Bluetooth, it says BT, opticals, changes to OPT, and if I’m using RCA plugs, then it changes to AUX, or A-U-X.

There is a remote control with the unit also, which means that you can control media, adjust volume, and also change between a few presets.

You can also access the settings for the sound bar, which, again, the small LED display on the front of the speaker will show you what you’re doing, which includes turning the bass up and down, or the treble up and down, etc.

You can change between music mode, TV, movie mode, and TV news mode. But I found that the movie mode was the most impactful.

Well, something that I’ll say about the Tapio I Pro is that it is really quite loud. I found myself keeping it at really quite low volumes, and it certainly punched out more volume than I expected as soon as I turned it on.

With HDMI ARC, you can control the volume just using a TV remote, or you can use the Tapio I Pro included remote control to control the volume for the TV, or if you’re using it for Bluetooth, or using another input option like optical or auxiliary.

The sound certainly transforms what’s coming out of the TV into something that is much more legible. The vocals are very clear.

There’s a huge amount of space that enters the sound when you enable the soundbar, and the room is overall quite full of noise. It is quite a directional sound, but there is a lot more breathing room in what’s coming out from the audio that you feed it.

There’s some increased bottom end, plenty of mids, and some high end, but it does tend to lose a little bit of the lower mids and the upper mids from the sound signature. So, if you’re looking for something that will help you hear clearer when using your television, then this will certainly do that.

And in my living room, which is a fairly decent size, and I sit about six meters away from the TV, it threw all of the audio to me with ease. And as you’ll see from the photos, it actually looks pretty good in front of the TV as well.

I did find myself turning up the bass though. I felt that the bass wasn’t there as much as I had hoped.

Looking at the unit, it is quite capacious, and I kind of thought that with that volume in the unit, it would then punch out some additional bass to the sound signature.

It does add the bottom end to your listening, but I had to turn up the bass to the maximum available, which is five.

The bottom line on that is that I think if you’re going to buy the Tapio I Pro, and you definitely want some heavy bottom end, then it would be very easy to pair it with some sort of subwoofer to elevate the listening experience even higher.

My conclusion on the sound quality is that, as I’ve said, if you’re looking at something that’s going to elevate your TV experience, this will do that, but it won’t provide a full cinematic experience in the main living room.

And that leads me to really my conclusions about the Tapio I Pro.

The perfect environment for the Tapio I Pro, in my opinion, is either for those that have a TV in their bedroom or a second lounge, such as I have, or if you are on a strict budget and just want to get something that’s going to make everything sound a bit better, or perhaps you’re living in a flat, and not only the budget but also just your willingness to spend money on gear is not high.

For the price, I really am impressed with the inclusions and the build quality. I enjoyed the sound quality improvements over what I had, and it will certainly be remaining as a permanent fixture in the studio with the TV.

The Bluetooth connection with the Tapio I Pro is nice and easy. You can connect your phone to it and listen to music just through the sound bar without needing to bother with the TV.

This is a pretty decent sound but certainly wouldn’t compete with a UE BOOM or anything more commonly found in people’s houses for listening to music alone.

If you’re on a budget, and you want something for your TV and something that you can listen to music to, then this is a great choice. And I would have no difficulty recommending, at this price, this as a device for bedrooms, small living rooms, people on a budget, or someone that just wants something to sound a little better and also have that option to play Bluetooth music from their phone.

The inputs available on the unit are the HDMI ARC, an optical cable, an auxiliary, and also a USB port, which you can plug into. And then on top of this, of course, you have the Bluetooth option if you would like to connect via Bluetooth.

In the Tapio I Pro, you’ve got four speakers, two that act as drivers, and two that act as tweeters. They are 2.25 inches each, which isn’t huge, but pretty common for any soundbar.

And at the end of the speakers, at either end, there is a vent port. And it was this vent port that made me think that perhaps there would be a lot more bottom end coming out of the unit.

I think for the price, you’re probably going to get what you pay for in terms of bottom-end response, which isn’t a criticism, but really more of an observation. It is a two-channel unit and has a peak power of 60 watts, which is plenty when you’re really just driving that mid-range frequency.

It’s about 1.2 kilograms and uses Bluetooth 5.0. Its dimensions of it are 548mm, or 54 cm, or nearly one and three-quarters of a school ruler.

The depth is 100 mm, and the height is 70 mm. So it’s not particularly streamlined, but as you can see in the HD photos above, it still looks really nice and doesn’t look particularly large or bulky on your media cabinet.

My conclusion, and summing it up. 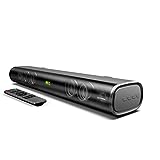 The Tapio I Pro is a really good-looking unit, and some decent thought has gone into its looks and aesthetics and how you use it. The controls on the end of the soundbar, the easy mounting bracket system, and the HDMI ARC inclusion means that once you’ve plugged it in, it really is set and forget, and you can enjoy your TV listening more than the TV speakers that you got with your unit.

It’s really important to keep in mind here the price, in that this is a budget soundbar unit, for less than $100, that is going to elevate your TV experience way beyond what you’ve got now.

If you’ve got any questions, fire them away in the comments below.