The X-Sense WiFi Smoke alarm was impressive from the moment I held it in my hand. The build quality and attention to detail for a smoke alarm was great.

The TuyaSmart app might be new for some but install it, create an account follow the intructions in the included manual for a quick painless set up.

The settings that can be controlled from the app make it easy to test and silence the alarm, and more.

It’s VERY loud, which is what you want.

See Price on Amazon
…and another 787 Reviews 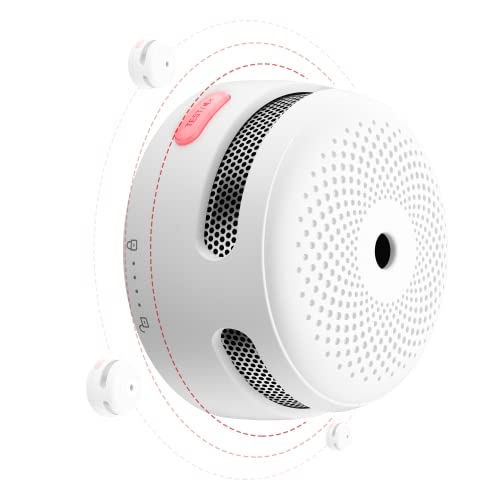 The XS01-WR is a similar unit but instead of being connected via WiFi to the internet, it can interconnect with others of it’s kind.
This creates an impressive ‘mesh’ network of smoke alarms that will alert each other if one smells smoke. 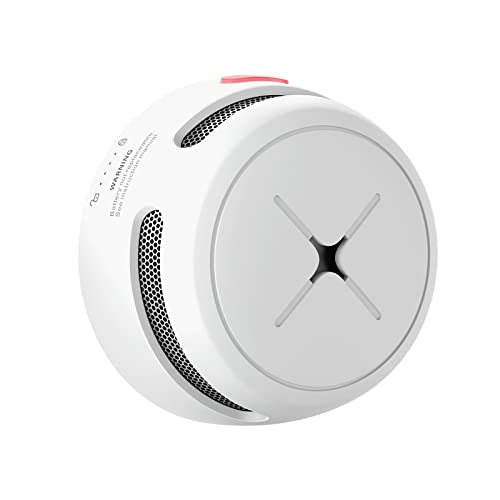 This looks similar, costs less but doesn’t have the Wi-Fi connectivity. I only mention this one as you might just want the smoke alarm and it is cheap.

Personally, I love knowing if there is a fire, I’ll be the first to know. I can call for a fire truck and not even be home to get ahead of the fire. Which is why I’d still choose the XS01-WT, personally. They also seem to be an amazon only brand.

I’ve had the X-Sense Wi-Fi smoke alarm in my house for a few weeks now.

As many of you know, I also recently reviewed the X-Sense smoke and carbon monoxide dual detector, which I was really impressed with.
The beauty of that system is that you can interlink it so that when one unit goes off, they’re all connected wirelessly together, and they will all go off.

Meaning that if there is a fire with smoke or a carbon monoxide issue in your house, everybody gets some really good advanced warning.

X-Sense sent me their Wi-Fi smoke alarm to have a look at, and immediately, I was impressed from the moment I took it out of the box.

This thing is really well designed and incredibly well machined.

It’s probably the best-looking and best-made smoke alarm I’ve ever held in my hand for the price.

It sounds a little crazy to talk so enthusiastically about inanimate objects, but when something this affordable comes so well made and designed, I can tend to get a little excited.

The machining, the curves, and the button on it, which has multiple LED lights behind it to create different button warnings is just so well put together.

It would be very difficult for me to walk past this in any hardware store without picking it up and buying it compared with what is there now. #fanboy

Speaking of hardware stores, the smoke alarms that I’ve had historically have generally been ones that I’ve picked up at the local hardware store, not particularly expensive, but not a lot cheaper even than this unit.

They’re usually quite plasticky, not a lot to them. They run off a nine-volt battery, and in time, they tend to fall apart. That could be just because smoke alarms tend to have a limited lifespan, but the ones I buy seem to pass out after about three years.

This could be because we live near the ocean, but I’m optimistic that the X-Sense Wi-Fi smoke alarm, just because of the quality of its build, will hopefully have a longer lifespan.

When X-Sense say this is a Wi-Fi smoke alarm, what does that mean?

The X-Sense Wi-Fi smoke alarm works with the Tuya Smart or Smart Life app. If you’re not familiar with either of those, the Tuya Smart app is an app that has been gaining a lot of momentum over time as a smart home app that is fairly agnostic in terms of the devices that it can connect into.

It’s particularly popular in Asia, and as more and more items are being exported internationally, more and more people are getting into it.

The OG comparison that I could make would be the SmartThings app and Hub, which has great connectivity across lots and lots of different units. That also includes Z-Wave units.

The Tuya Smart app tends to focus on Wi-Fi or Bluetooth devices and the X-Sense smoke alarm connects to the Tuya app effortlessly and is easy to maintain from within the app.

Connectivity was a breeze

The box includes a very simple manual, which gives you instructions on how to connect the Wi-Fi smoke alarm to the Tuya app. And there are two different ways to connect.

Most of the smartphone systems and devices that you’ll have will use the easy-to-connect method, which is as simple as opening up the app, adding a device, choosing a Wi-Fi sensor, and then connecting the X-Sense model number. It’s one of the simplest pairings I’ve ever done with a device.

If you do have problems connecting the XS01-WT, watch my video above – about half way through I walk you through connecting it.

Once it’s connected, there is a very easy-to-set control panel, which gives you a myriad of options.

Also ReadCan Echo Dot Be Used as a Bluetooth Speaker?

So that would be in the event that flat battery is replaced or a battery that maybe has been knocked outta place gets put back in.

The unit in the box comes with a battery ready to go. And all you have to do is remove the plastic sleeve. It uses a CR123A battery size.

There’s also a silence option in the app so that you can silence it from your phone rather than having to get up on a ladder and press some buttons.

And as long as your router isn’t already full of devices, then there’ll be plenty of room for this. It has a photoelectric sensor, which is common to most modern smoke alarms, and is very quick to detect smoke.

It has a 10-year expected operating life, and it’s a lovely small unit that would look at home in most of the ceiling and wall services that you could put it on.

The battery life is estimated to be one year, so you will want to set a reminder in your calendar to replace the battery every year. And if you are like anyone in my family, then April 1st seems to be the day that is designated as the battery change day every year.

The indicator light on the side has a red or blue status.

In the box, it does come with the unit and a simple mounting bracket. It also has a manual and all of the screws that you’ll need to mount this wherever you are going to put it, including some masonry bracketing.

Summing it all up. 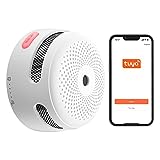 I’ve been looking for a wireless or smart smoke alarm for a long time. I do love the carbon monoxide and smoke sensors, and the fact that they’re interconnected, but I also would like to get notifications if I’m away from the house.

With the Tuya Smart smart app and the X-Sense Wi-Fi smoke alarm, I get exactly that.

I get notifications. I can silence it remotely. I can check in on its status remotely, and I don’t have to climb up and press buttons to test it at any time during the year. It looks really good, is incredibly well made, and nicely designed.

I wouldn’t have any problem in recommending this to anyone that is looking for a wireless smoke alarm for their home.

Looks, features, and functions aside, the price on this is just really good.

If you’re looking for something that gives you that remote connectivity to the wireless devices in your house at this price, it definitely gets highly recommended from me.