Can the Aeotec Z-Wave repeater solve the issue of Smart Home devices failing to do what you tell them to? 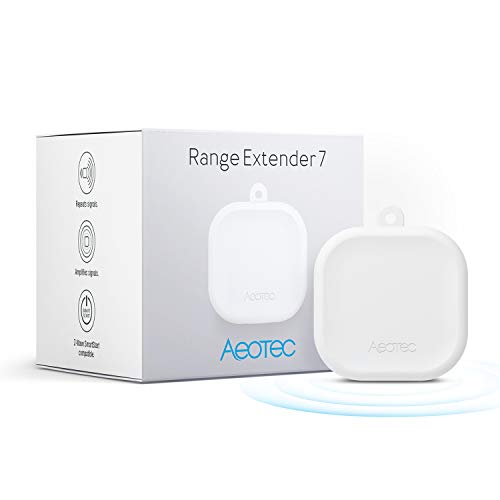 If you think you need a Z-Wave range extender or booster, you’re probably right. For a long time, I cursed my home automation network – both the scheduled automation and the verbal ones I was asking Google Home and Alexa to execute. Turns out, even though I don’t have a large house (170sq meter rancher), and I have loads of Z-Wave devices to hop across, it just wasn’t enough.

So many learnings about how to solve your intermittent Z-Wave issues below but essentially, the Aeotec booster solved them all, even the faulty switch I mentioned in my post about the Aeotec Smart Switch 6 (used to be Aeon Labs). 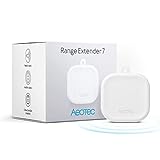 As awesome as Z-Wave is, it also has its challenges. Don’t get me wrong, I love Z-Wave. It’s an amazing closed mesh network that opens up so many great opportunities for Smart Home and Home Automation solutions. It’s used on smart meters, smart home hubs and all sorts of other smart things but all of this is useless if it doesn’t work when you need it to.

What is the range of Z-Wave and Z-Wave Plus?

Before I talk about the range of individual formats let me just say that current Z-Wave networks allow for up to 4 hops max. A hop is from one unit to the next in the mesh network.

Z-Wave devices are two-way communicators so they send a signal to things and back from things. This is also where the range extenders come in to play which I’ll illustrate below.

So, the more devices you have in your home, the further the network can reach. I’ll explain in more detail why having ZWave range extenders, or boosters, makes a lot of sense in a minute. I’ll even draw you some pictures to illustrate what I mean. Also, check out the video below in this post as I visually talk through examples of how this works and why the Aeotec Z-Wave Range Extender 6 has solved my Z-Wave issues.

This isn’t a sales pitch, it’s honestly changed my whole experience and I no longer feel the need to upgrade my hub.

A few pictures of the retail box and more.

Z-Wave vs Z-Wave Plus Range

A first-gen Z-Wave product will have a range of about 30-40 feet of useful reach. Like a pair of walkie-talkies you buy at Walmart that says “500 feet range!” It’s all about the line of sight, other interference from phones/wifi routers/electrical things etc.

So while the potential range for a Z-Wave (Gen 1) device is 100 feet, up to a maximum of 328 in open space, it’s better to think of 30 feet as the range. So if you’re wondering why some of your Z-Wave devices are sometimes working and other times not, this might help explain that.

A Z-Wave Plus device can reach a lot further than Z-Wave. It will be functional to about 60-70 feet.

If you have a Z-Wave hub and not Z-Wave Plus and you think upgrading it will solve your problems – READ THIS NEXT PARAGRAPH FIRST.

Upgrading to Z-Wave Plus – did it fix my Z-Wave range issues?

No. It didn’t. My Gen 1 abode is only ZWave so I went out and bought a Raspberry Pi unit and an Aeotec ZStick (Z-Wave Plus). I installed Home Assistant (HA / Hass.io) and disconnected all my gen 1 Z-Wave devices so it was only Z-Wave Plus devices.

IMPORTANT NOTE: If a Z-Wave Plus network has any Z-Wave (gen 1) devices on it, it will revert / regress to acting like a Z-Wave network and not employ Z-Wave Plus. So it becomes a waste of money if you decide to keep your first-generation Z-Wave devices connected. Don’t go out and buy a new Smart Home Hub or Gateway with Z-Wave Plus and then connect a mix of Z-Wave and Z-Wave Plus devices to it.

Anyway, I set up my new Home Assistant unit, learnt some YAML and got it working a treat. I connected ONLY my Z-Wave Plus devices and expected good things…only…I still had issues with some units at the end of the house. STILL, things sometimes worked and sometimes didn’t.

Learn from my mistakes people!

My Z-Wave Home Automations set up

Also ReadCan Echo Dot Be Used as a Bluetooth Speaker?

Why do I need a Z-Wave repeater? Aren’t Z-Wave devices all repeaters?

Yes, most all (not quite all) Z-Wave devices are also repeaters. This means that as long as they are powered (even in standby mode for most) they act as a repeater for other Z-Wave devices to and from the Smart Home Hub or Home Automation Gateway. The problem is some devices are not that powerful. Let’s look at a typical Z-Wave, Z-Wave Plus and Aeotec Wave Range Extender.

Fast? Aetoec says ‘it’s up to 250% fast than other devices’. It’s so true. I’ve never seen devices react as quickly as they do with the extender. It’s instant, and up until now, my Z-Wave devices seem to think for a second before they react.

This video is an unboxing and review.

This video covers the ARE6 and some other important things to know, especially, how z-wave boosters and range extenders work and why 1 might not be enough.

Some frustrations with Z-Wave

Someone had the bright idea that different countries should operate on different Z-Wave frequencies. For the USA and a raft of other countries it’s 908.4MHz, for Australia and New Zealand and others it’s 919.8 or 921.4. I understand this may have something to do with avoiding interference with other local devices like cordless phones but it’s a shame.

You can’t buy Z-Wave devices in the US for use in Australia, NZ, Hong Kong etc, as the frequency is different.

I learned this the hard way buying an NZ frequency hub and then buying a smart lock, only to learn after trying for 2 days to connect it, that it wasn’t compatible.

It reminds me of DVD piracy protection which was a total failure. Remember putting in DVD’s that you bought on holiday only to discover it didn’t work in your local DVD player because they are region locked. Anyway, I digress…

Totally off-topic but one way to get around the issue of different frequencies in Australia, New Zealand, Hong Kong and the USA – or anywhere else is to buy a dual voltage Smart Home Automation hub from the USA – something that can handle 120-240v – and then buy all your compatible devices from the USA too. This gives you a wider range of compatible devices (there are more Z-Wave devices made for the USA first that other markets). Not a brilliant idea but one to consider. It’s too late for me already.

The Aeotec Range Extender 6 (now updated to the Aeotec Z-Wave Plus Range Extender 7) works. It solved the issue I had with a weak switch. It’s fast, really fast at responding and I wish I could force all my devices to route through it for that reason. I might get another one to do just that.

For less than a dinner out, it’s definitely worth getting this Z-Wave range extender to boost your signal through your house. I’ve had no failed nodes and no failed commands since I added it to the end of my house.

I thought I could add more switches and devices and it would fix my issues but being limited to 4 hops, this is the only thing that has.