Fosi Audio just seems to go from strength to strength. The new TB10D has been updated, and I’ve been putting it through its paces with some of the Hi-Fi gear I have at home.

Like a lot of the Fosi Audio stuff, the TB10D is a small little unit. You really don’t expect much from it until you plug it in, and that’s when everything comes to life.

The Fosi Audio TD10D is a little powerhouse. While the tuning is a little bit stoic and austere for me in the mid range, the bottom end is full and rich, plus the overall sound production is really nice.

I’ve used it on my Q Acoustic 3010 speakers and a set of tower energy speakers at 150 W per channel @ 8 ohms and it had loads of headroom left.

For the price – it’s top stuff and I’ll likely swap out my older Denon integrated amp for this in the future.

See Price on Amazon
…and another 104 Reviews 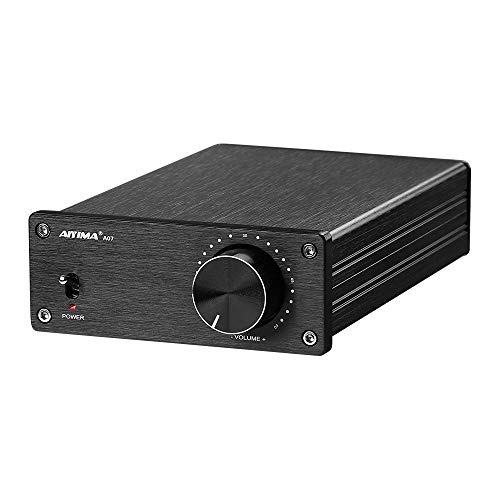 Affordable and simple Class D amplifier yet powerful in setting up an audio system.

Fosi Audio kind of has a trademark design and build.

It’s usually just a gray or steel casing, with some decent, solid volume and EQ control pots. The switches on them are often reminiscent of things that you’d pick up at the local electronics store if you were doing a build-your-own.

But the Fosi Audio units are a far cry from a build-your-own and have continued to be pretty impressive over the years. I remember way back in the early days when S.M.S.L. and Fosi were both rising together through the budget HiFi space.

The Fosi Audio TB10D is a two-channel class-D power amp. It’s the class D that makes this perform so well despite its very small size.

Class-D amps have become increasingly popular, plus they are small, light, and don’t run too hot. They’re cooler than other classes of amps like A, B, and ABs, but they produce the same amount of power.

They’re certainly well-made for car stereos. But having run the TB10D through a couple of sets of different speakers, including the Q Acoustic 3010 and an Energy Tower set, this thing has enough power to make most speakers sound pretty good.

If you’re thinking that this is reaching a little bit far to run into some floor-standing speakers, then the 600 watts of power output would say otherwise.

There’s only one input on the unit, which is RCA, while the Fosi Audio K5 Amp DAC has RCA coaxial, optical, and USB inputs.

If there was anything that the TB10D could use, it’s possibly another optical input format. But the RCA was more than suitable for my use, and the initial testing I did was just using an Alexa Mini to play into the Fosi Audio directly.

This was actually a great combination. If you’ve got a small footprint to work with, then just taking a smart speaker like the Alexa Echo and running the 3.5-mill out to a stereo RCA into the Fosi Audio is easy and fun to control.

I also tested the Fosi Audio TB10D with a NAD CD unit, running into the floor-standing Energy speakers. While it didn’t have loads of headroom, it was enough to power them and make them sound pretty good.

I have an old Denon amp at home, which you’ll see in the photos. It’s a DRA-37, and if my memory serves me correctly, it’s only about a 50-watt amp, but it’s such a warm, wholesome, and deep sound.

I’ve always held onto it because I appreciate how it can power a set of bookshelf speakers.

I attached the Q Acoustic 3010s to the Fosi Audio TB10B. After a few minutes of listening, and a little bit of tweaking with the bass and treble pots, I have to say that I was floored at how much more bottom end I could get out of my Q Acoustic bookshelves with the Fosi Audio, compared with the Denon.

It was full and tight, and the overall sound signature was really rich.

I find that the TB10D doesn’t have a particularly warm edge to its chipset and tuning, but I find it quite enjoyable to listen to. I even think I might have to retire the Denon and get another Fosi Audio TB10D. 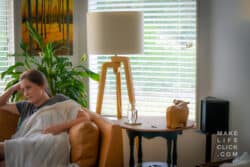 When I say I need to get another one, I meant replacing my father’s NAD unit, which was a C370. It was an absolute giant in its time, which is about 20 years old now, and it did win the What Hi-Fi? Integrated Amp Award two years running.

Unfortunately, being by the ocean, the C370 has given up and is no longer keen to play anything. So as a replacement, in the short term, which will probably end up being months if not years, the Fosi Audio is going to replace it.

If you imagine a C370 being replaced by something not much bigger than a couple of smartphones, it’s amazing to realize how far we’ve come in the last 20 years of Hi-Fi.

The class-D amp now has the ability to output such power at such a small size that even floor-standing speakers can sound full and rich from such tight little units.

The outputs on the TB10D are simply two stereo outs, and I would certainly say your life would be a lot easier having your speaker cable terminated with banana plugs, so you can simply plug in the Fosi in the back.

The other thing I like about the Fosi Audio TB10D is its compact form factor.

It’s definitely portable. If you’re thinking of taking the Fosi Audio TB10D on the road, it would fit neatly in a laptop bag, a carry-on, or a suitcase, depending on where you’re heading.

Where you’re going to take it and what speakers you plan to use it with is a different challenge. But it’s nice working with such a small unit if you don’t need numerous inputs and outputs, and are just happy to have a stereo unit with you.

The Fosi Audio TB10D box has the slogan “Hi-Fi Made Fun” printed on it, and I think that Fosi Audio is certainly living up to it.

As a brand, they back their products with a 30-day return and an 18-month warranty, plus a lifetime of tech support.

They’ve been in the game long enough to know how to support their products. They also know that their products are good enough that it’s probably unlikely you’ll need a lot of tech support or warranty.

While perhaps not able to compete with my high-end Denon AVR4500X stereo-integrated amplifier, the Fosi Audio TB10D makes a perfect companion for bedrooms, offices, studios, or something to take on the road with you. 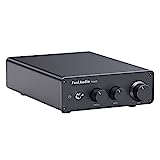 It’s powerful, it’s full and rich and warm, and the bottom end is really impressive. It’s a simple unit with a simple purpose, as a stereo power amp with a single RCA, and it does what it says on the tin.

While the tuning isn’t perfect, it’s hard to say anything too negative about the unit given its price.

I would highly recommend the Fosi Audio TB10D to anyone looking for a budget stereo amp, whose needs extend as far as having a source that can be put through a stereo RCA input.

Any questions, fire them away in the comments below.

What impedance is the Fosi Audio capable of?

The Fosi Audio TB10D is capable of two to eight-ohm impedance.

Why does the TB10D not work when in close proximity to the radio?

Class-D amps are known to have some serious issues when used in proximity to a radio. So it’s highly recommended that you keep them separated, or avoid using them altogether.

Can I run a phono turntable with the TB10D?

You can run your record player off the TB10D, but you will have to have an external phono preamp before you connect it. You’re going to need that extra power before putting it through the TB10D, to ensure the turntable is powered appropriately.

Can I use the TB10D with headphones?

No. The TB10D is only designed to support speakers.

Can I run my powered speakers off the TB10D?

No. The Fosi Audio TB10D is only designed to be used with passive speakers.

No. Class-D amplifiers don’t consume a lot of power, so you can leave it plugged in all the time. But like all electronic devices, if you’re not using it, turn it off.

No. You cannot bridge the TB10D amplifier.

Can I play my television through the TB10D?

Yes. You can pretty much attach anything through the RCA input, which would include a TV.

Yes. You can pretty much attach anything through the RCA input, which would include a TV.

You need to buy one of the Fosi Audio 2.1 amps, or another amp that can support sub-output. The unit that I have is a two-channel amp only, and cannot power a subwoofer as well.