Nonetheless, Sony says that they are now worthy of the top spot in active noise-canceling headphones. And for many of you, you will probably agree with that, especially if you are a Sony fan.

As a person that has tended to gravitate towards Bose or even B&W active noise-canceling headsets, actually, even Audio-Technica active canceling noise cans for that matter, the Sony sound signature has always just not been right for me.

So, I was kind of excited with the thought that finally, Sony might have released something that had now leveled up to a point that I would really want to own them.

ANC is better but sound quality a mixed bag 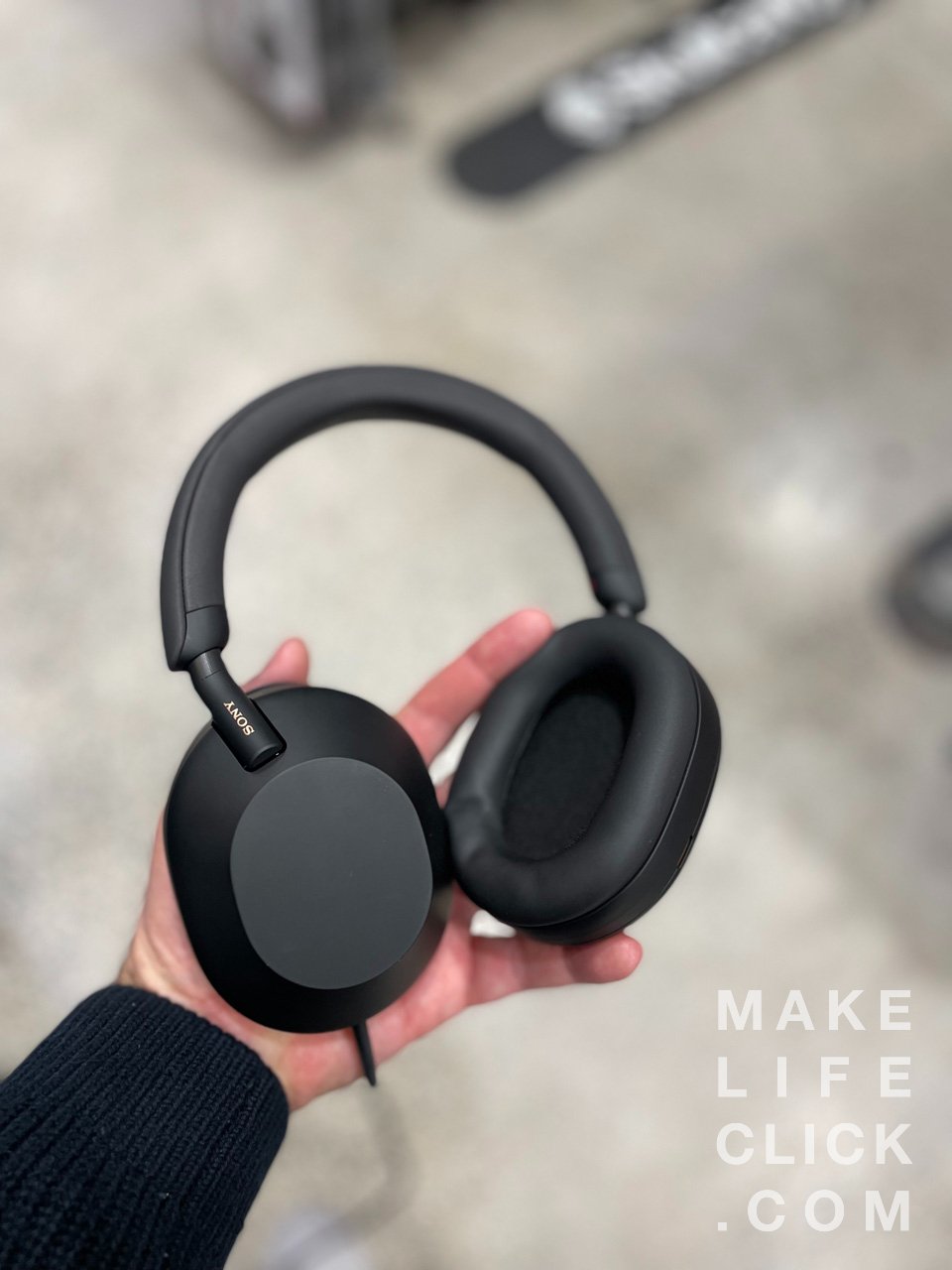 The Sony WH-1000XM5 just haven’t progressed their sound signature to a point I feel them worth the money. I won’t be popular for saying it but they just sound a little confused to me, and lost in wooly bottom end.

See Price on Amazon
…and another 2,887 Reviews

I feel like the WH-1000xm4 had a tougher sound signature which appealed more. Still too heavy in the bottom end but a better older brother worth considering. 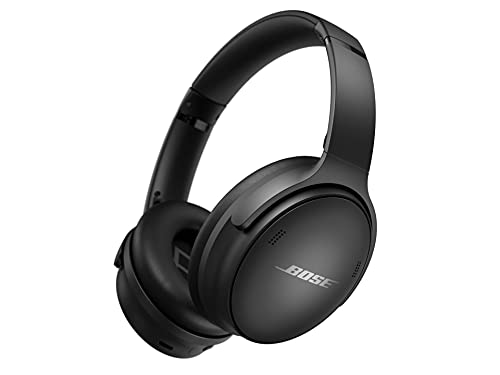 The QC45 treat the overall sound signature with a bit more balance. Super comfort and great battery life. While the active noise-canceling isn’t as good as the Sony WH-1000xm5 the overall sound stage might appeal to people for whom the Sony aren’t their cup of tea.

And in my review of the QC 35s, you’ll see there are a lot of important factors that I’ve found when traveling that the Bose headphones fit. So I’ve had quite a few listens now to the WH1000-XM5s, and my first impression was not as bad as my second impression, but I’m still not sure I’m going to be running out to the store to buy a pair.

The two auditioning sessions that I had for a lengthy period of time really just confirmed for me that the Sony sound signature is definitely not my style.

So, let’s start with the build quality. These have really ticked a lot of boxes that I found in the previous units that didn’t for me. One of those is the comfort and weight of the headphones and the lightness on the ears.

There is certainly something to this build where there is a light and comfortable feel to the headphones. They’re a little bit skinny down, a little bit rounded off to make them a little bit softer, which if you’re traveling on a lot of long haul flights, or any travel for that matter, does make a difference.

I definitely found that, unlike the WH1000-XM4s that the WH1000-XM5s didn’t make my ears as hot or as warm over a long listening period. 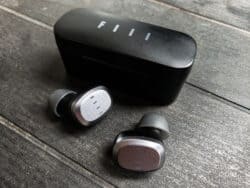 So, the build quality on these is definitely a notch up. The style is attractive enough and innocuous enough that I would be more than happy to wear these out in public. They don’t scream millennial, but they also don’t scream retired businessmen.

They’re somewhere in this neutral space, which for some, may be a bit of a turnoff if you think that making a statement is important, or that headphones should aesthetically match your style, which is fine.

The external microphones have a slight tan coloring to them so that you can see them through the slots. I’m sure that there’s some reason for doing this rather than making them black. And that could be that just the microphones have been left in that state for picking up those external noises. And that is why they still look that color.

The active noise-canceling on these is definitely impressive. And I would have to give them the award after comparing both the QC 45s and the WH1000-XM5s.

I think Sony has really definitely reached the top of the noise-canceling spectrum. It was an incredibly pleasant experience to put these on, push the button, and feel the world melt away around me.

That’s not to say that the QC 45s are not still an amazing active noise-canceling headphone, but the noise canceling from Sony on this particular upgrade is just that slight bit better.

I was going to break this down into bass, mids, and trebles just a little bit.

So I’ll start with the bass. The bass for me is and has always been too inflated on Sony headphones for me. It’s kind of like they take all of the bottom end and the mid-bass, and they just blow it up like an air mattress.

And for me, it just competes too much with the mids and the trebles and creates an unnatural feel to the music.

It doesn’t reach that point where you feel like you’re in a home theater environment. It also doesn’t sound like you’re listening to earbuds. There’s just this kind of bass that overtakes you. And even after listening to it for a while, it’s hard to adjust to that much bass.

For long listening periods, I just find it wears me out a little bit. And I’ve tried different music with it. And there are certainly some genres where it improves, but overall, it’s just too much for me. Now, before the Sony haters jump on top of me, I must say that I’m sure there is a lot about these units that they love and that the sound signature in them is just right.

I think the WH1000-XM4s whilst also had inflated bass, had quite nice mids, and I feel like the WH1000-XM5s have kind of lost a little bit, or at least not improved far from where they were on the previous model. It’s not unpleasant.

It’s definitely there. It’s not super sharp. It’s not super fatiguing, but I just feel overall, it’s not quite where it should be for a generation improvement on the current models.

Treble is much the same. There is a lot of overall top-end range, and this doesn’t sound particularly sharp or aggressive. It definitely fits in well with the mids, so that there’s some quite nice balance between the mids and the trebles, but the bottom end, as I say, definitely kind of fills right up to the edge of the treble range. So that it’s hard to sit back and enjoy only that.

One of the things I definitely like about the WH1000-XM5s is that vocals do really stand out and are heroed in many of the tracks that you will listen to. It’s nice not to have that sculpting.

So I wouldn’t say these are V-sculpted, even though I keep talking about how heavy that bottom end is, the vocals do stand out really quite nicely. And this is great if you’re listening to vocal-oriented music.

Overall, a sound stage for me just wasn’t really there. The isolation of the instrumentation didn’t feel as good as it could. I felt like everything was kind of all in the same box competing for the same space and the sound stage just didn’t feel open and breezy and airy and let everything set in its place within that whole sound stage.

Overall, these are good headphones, but I think for the price, there are probably other options out there.

If your main reason for buying these headphones is the active noise cancellation, then they’re an excellent pick. If the sound is most important to you, then I’m not sure that these would be the first pair of active noise-canceling headphones at this price that I would pick up off the shelf.

I’m not saying that Bose QC 45 range is the most impressive audio file headphone either because, with any active noise-canceling headphone, there’s compromise involved, unfortunately. But I feel for this price and this sound quality, I’m not sure that these would be my first pick.